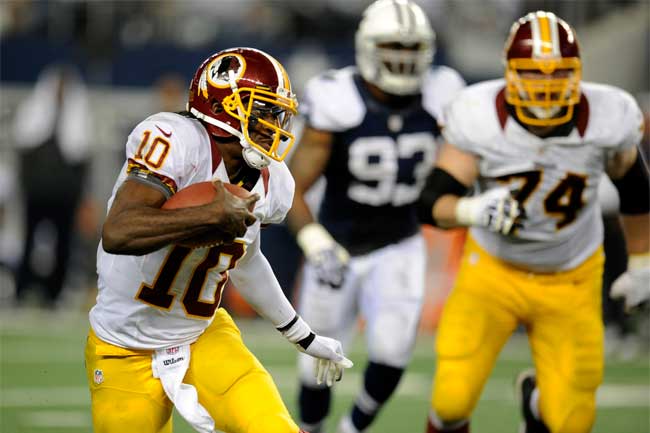 Monday night serves up a big NFC East divisional encounter as well as a six-game slate in the NBA. CasinoReview’s got you covered with our pick of the action on this first Monday of December.

Washington (5-6, 2-3 home) welcomes the New York Giants (7-4, 3-2 road) to FedEx Field tonight for Monday Night Football. This storied rivalry has some added flavor to it thanks to the compact NFC East standings.

A win for Washington will mean that both the Redskins and Cowboys are just one game behind the Giants with four to play. That means a small margin for error for all involved.

The two sides met earlier this season, with the Giants narrowly emerging victorious in a contest that ended 27-23. That game saw Robert Griffin III tally 258 yards through the air and 89 yards on the ground. A similar performance and we could be seeing another upset to go with the six that emerged from Sunday’s slate.

That Giants victory snapped a two-game Washington winning streak in the head-to-head series. However, it is New York that has had the run of this rivalry of late, winning 10 of the last 13 and 12 of 15 since Tom Coughlin arrived in town.

The Giants’ fairly sturdy rush defense will be up against the best rushing team in the league; Washington averages 163½ yards on the ground per game. The Redskins have won two straight games, scoring a total of 69 points. Both teams know how to pile the points on, ranking No. 5 and No. 6 respectively in scoring this season.

Odds: The Giants opened as 2½-point favorites, a number that has since risen to three. The over/under is 51.

Take: NY Giants – As much as it would be a great storyline for the Redskins to take a hat-trick of wins against division opponents in three weeks, the Giants will prove to be a little too much tonight. Take the Giants to cover the spread, but don’t be surprised if this is decided by a field goal. Despite both teams being high-scorers, take the total to go under; 51 points is a big ask in a tight divisional game.

It may not be one of the NBA’s glamor matchups, but this could be a chance to make a little cash at the expense of your bookie.

After a very surprising start to the season, Charlotte (7-8, 5-4 home) has lost three straight, falling below .500. Meanwhile, Portland (7-10, 3-7 road) has lost five of the last seven and is floundering at the bottom of the Northwest Division. It’s highly unlikely that this will be a pretty game, but it’s one that the Bobcats can win. After all, Portland is the one and only casualty of the not-very-formidable Washington Wizards.

Odds: Portland is a two-point road favorite heading into Time Warner Cable Arena, with the over/under at 195.

Take: Charlotte – The fact that Portland is considered favorite plays into your hands here. The Bobcats may not have the best home record in the league, but that record is better than the Blazers on the road. Take the total to go under; points may well be at a premium.

Orlando (6-10) took down the Lakers on Sunday night, claiming some bragging rights of sort in the wake of the debacle that was the Dwight Howard trade. That victory gives the Magic six wins on the season, enough to beat out four teams in the East. Basically, Orlando has had and will continue to have a tough time of it this season.

The Magic will visit Oakland on Monday night to take on the Golden State Warriors (10-6). After years of bottom-feeding, the Warriors are top of the Pacific Division, and whilst it’s far too early to get overly excited about that fact, the Warriors’ recent play – seven wins in nine games – suggests this may be a team about to turn the corner. And a team the Magic is not going to want to face.

Odds: Despite Sunday night’s win over the Lakers, the Magic are underdogs (+9½) with the over/under at 196.

Take: Golden State – The Magic will struggle in the second night of a back-to-back, giving the high-octane, hard-rebounding Warriors the advantage. Take the Magic to cover the spread though, and the total to go under.