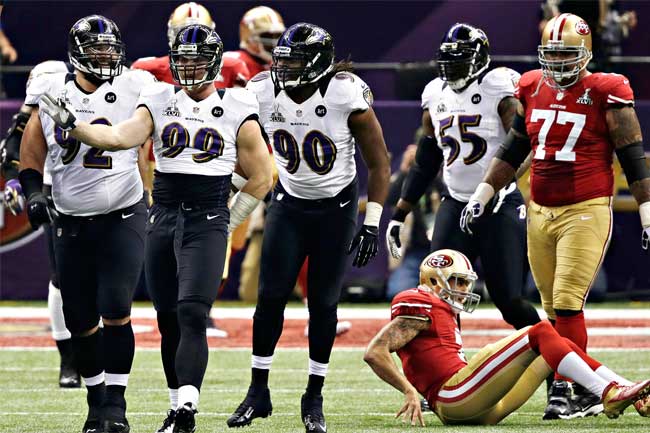 Before the dust has even settled on the spectacle that was Super Bowl XLVII, bookmakers have released odds relating to Super Bowl XLVIII, to be played at MetLife Stadium in East Rutherford, N.J., on Feb. 2, 2014.

Sunday night’s game in New Orleans proved to be something special. From the opening anthems – including a poignant performance by the Sandy Hook Elementary School Choir – through Beyonce’s love it/hate it halftime performance, from a 34-minute power outage to the confetti raining down on the champions, this was a Super Bowl that won’t be forgotten anytime soon.

San Francisco and Baltimore put on one heck of a display, with the Ravens jumping out to a 28-6 lead on the first play of the second half, before San Francisco mounted another unthinkable comeback. It came down to the last seconds of the game, with the Ravens managing to hold off the Niners, ultimately going on to lift the Lombardi Trophy.

But football betting is fickle, and before the Ravens can even enjoy the sweet taste of victory, bookmakers are putting a new spin on things and offering odds on next year’s super event.

As it stands, Denver and San Francisco have been installed as the favorites to follow in Baltimore footsteps next season.

After a long and tough season, San Francisco almost made good on 9/1 preseason odds this season. The Northern California side advanced to the Super Bowl – and came within touching distance of a win – having been eliminated at the conference championship stage last season.

Odds makers believe Jim Harbaugh’s side will do even better next year, assigning the team 7/1 odds of winning Super Bowl XLVIII. The Niners will again be in search of Super Bowl victory No. 6, tying that record achieved by Pittsburgh.

The Niners are not alone though. Denver has also been assigned 7/1 odds of winning it all next season.

After a season that showed Peyton Manning – the eventual runner up in MVP voting – still has it and that the Broncos are stacked with talent, bookmakers like the Mile High City side to improve on this year’s conference championship appearance. A win would secure Denver’s third Super Bowl championship.

Third on the bookies’ list is perennial Super Bowl favorite, New England. By the time Super Bowl XLVIII rolls around, it will have been nine years since the Patriots last hoisted the Lombardi trophy aloft, but Brady and Co. are still expected to make noise this coming season.

New England is 15/2 to win next season’s Super Bowl, which puts the side marginally behind the odds (11/2) assigned to the team ahead of this past season.

Another perennial favorite takes the number four spot on the NFL Futures list. Green Bay is considered 10/1 to win the championship. The Packers were not as dominant as some expected this season, but with Aaron Rodgers under center there are few that wouldn’t expect the Wisconsin side to contend at the very least. Another Packers-Niners playoff clash wouldn’t go amiss either.

The top five is rounded out by a pair of sides with 12/1 odds: Baltimore and Seattle.

Baltimore may have won it all on Sunday night but bookmakers believe that the “Team of Destiny” used up most of its luck during the 34-31 victory over San Francisco. But then again, the bookies took a big hit thanks to Baltimore’s horrendous play ahead of the post season that saw the team 28/1 to win the Super Bowl after Week 15. There’s no way the bookies want the Ravens to win again.

It’s hard to imagine Baltimore won’t get a deal done that keeps Joe Flacco under center, but without Ray Lewis – and perhaps Ed Reed (retirement?) – the side will have a few spots to bolster if it’s to make a push.

Meanwhile, Seattle is a surprise entrant in the top five (which is actually a top six). Behind rookie quarterback Russell Wilson, the Seahawks were certainly one of the surprise packages this season, but most will be questioning whether Pete Carroll’s side can repeat this season’s success. Odds makers apparently believe they can.

Elsewhere on the Futures list, bookmakers expect Kansas City – this season’s worst team – to improve under the tutelage of Andy Reid. The Chiefs are considered 50/1 to win Super Bowl XLVIII, which makes them tied for 22nd place on the list.

Jacksonville is expected to be the league’s worst team next season. The Jaguars have odds of 150/1 to win it all. Buffalo and Oakland are second worst on the list, with odds of 100/1.