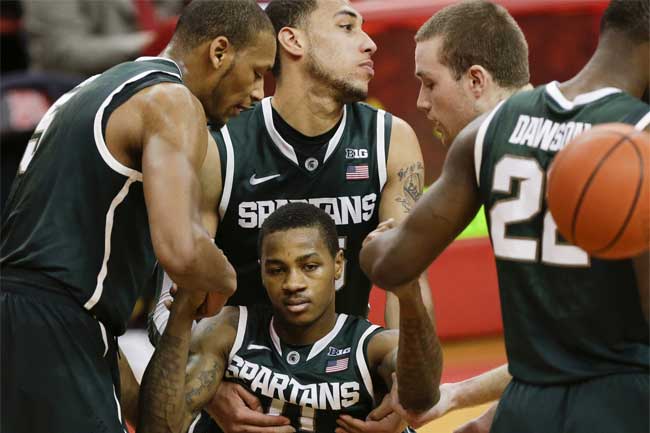 #4 Michigan State travels to Columbus on Sunday to take on #18 Ohio State in a must win game for both schools. Tip-off is scheduled for 4:00 PM ET from Value City Arena.

Michigan State’s 72-68 loss at home to #1 Indiana on Tuesday leaves the Spartans one game back of the Hoosiers at the top of the Big Ten standings. With a season sweep of the East Lansing side, Indiana holds a decisive tie-breaker.

A win over Minnesota on Wednesday put an end to a streak of three losses in four games for Ohio State, but that downturn now has the Buckeyes looking up at four other Big Ten schools. In danger of being swallowed into the mid-level tournament berths, Ohio State needs to put together some wins to improve its standing.

The two schools met on Jan. 19 at Breslin Center in East Lansing, with the Spartans scoring a 59-56 win.

Ohio State (14-2 home) enters the game favored over Michigan State (6-3 road). The Buckeyes however have fared poorly against teams ranked in the AP top 25, going 1-7 in such games. The school’s only win against a ranked opponent came on Jan. 13, against the Spartans’ bitter rival, Michigan. Michigan State has gone 4-4 against ranked opponents this season.

The spread opened at 4½ points. Neither school has been particularly good at covering the spread this season, which will make things that much more awkward for bettors trying to separate these sides.

The total opened at 129. Like the spread, bettors will have a tough time picking over or under in this one. Ohio State (10-12-1) favors the under while Michigan State (12-11-0) favors the over. Neither is particularly decisive though.

After Sunday’s game at Ohio State, Michigan State will have three games left on the schedule: a trip to Michigan (Mar. 3) followed by home games against Wisconsin (Mar. 7) and Northwestern (Mar. 10).

Meanwhile, Indiana still has four games on the schedule. The Hoosiers will face Minnesota (Feb. 26) and Michigan (Mar. 10) on the road, and Iowa (Mar. 2) and Ohio State (Mar. 5) at home.

It’ll be a tall task for the Spartans to overtake the Hoosiers to finish with the top berth heading into the Big Ten tournament, but it’s not yet impossible. One thing is for sure; the Spartans need to win in Columbus on Sunday afternoon.

The Spartans’ rivals, #7 Michigan (22-4, 9-4 Big Ten) will also look to improve its position in the Big Ten standings. The Wolverines will face a resurgent Illinois (20-8, 7-7 Big Ten) side that has won five straight games, ending a dreadful streak of six losses in seven games. The hometown Wolverines are favorites (-11) with the total at 138.

With #2 Miami (FL) suffering its first conference loss of the season on Saturday, #6 Duke (23-3, 10-3 ACC) can sneak one game closer to the Hurricanes at the top of the ACC standings with a win over lowly Boston College (12-14, 4-9 ACC) on Sunday afternoon. The Blue Devils bounced back from last weekend’s loss to Maryland with a 88-56 win over Virginia Tech on Thursday and will enter this one as the favorite (-16½).

With a win over #8 Syracuse on Saturday and #17 Marquette slipping up against Villanova, #11 Georgetown is now in sole possession of the Big East lead. At two games back, #25 Notre Dame (21-6, 9-5 Big East) will look to make up some ground as the Irish hosts Cincinnati (19-8, 7-7 Big East), losers of four of the last five. The Irish is a one-point favorite in this one, with the total at 124.