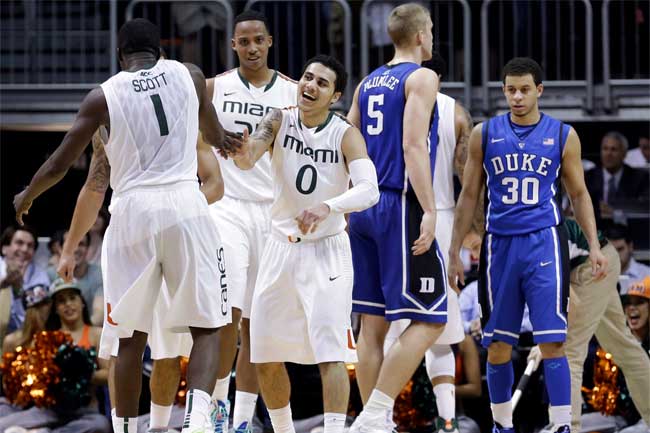 This season of college basketball continues to throw surprises at us from every direction. Last weekend alone we were railroaded by Miami’s first conference defeat and Georgetown’s Big East-topping win over Syracuse.

Here at Casino Review, we’ve scoured the remainder of this week’s schedule to pick out 10 of the most unmissable games out there. Our findings? This Saturday really is going to be a super Saturday.

Read on to find out which games you need to be following.

If #7 Georgetown (21-4, 11-3 Big East) is to hold on to the Big East top spot it snatched this past weekend, John Thompson III’s side will need to handle a tough Connecticut (19-7, 9-5 Big East) team. Marquette served a notice of intent by defeating Syracuse on Monday night, so the Hoyas have to win to stay atop the conference.

Having handed Colorado State a loss last weekend, #14 New Mexico (23-4, 10-2 MWC) controls its own destiny. Thanks to a tiebreaker advantage over the Rams, the Lobos need just two wins from four games to lock-up the Mountain West regular season title, and with MWC bottom-feeders Wyoming and Nevada on the schedule, that looks a dead cert. A win over San Diego State (20-7, 8-5 MWC) on Wednesday might not be essential, but it would go a long way in the eyes of the selection committee.

Having leapt into second place on the AP poll, Gonzaga (27-2, 14-0 WCC) has just two games left to impress. A trip to Brigham Young (20-9, 9-5 WCC) represents the toughest remaining game on the schedule for the side from Spokane. The Cougars would like nothing more than to avenge an 83-63 loss on Jan. 24, putting a big dent in the Zags’ season in the process.

Undoubtedly the biggest game of the week, and one nobody is going to want to miss, takes place in Durham on Saturday. Having succumbed to a first conference loss of the season this past weekend, all eyes will be on #5 Miami (22-4, 13-1 ACC) and whether or not the side can rebound. The Hurricanes will get a first chance to do at home to Virginia Tech on Wednesday, before a trip to #3 Duke (24-3, 11-3 ACC) on Saturday. The Blue Devils will be looking to make amends for a 90-63 loss in Coral Gables, and with an unbeaten home record, could well make this year’s ACC race even more interesting.

Back-to-back losses for #12 Syracuse (22-6, 10-5 Big East) all of a sudden has the Orange looking vulnerable. Louisville (22-5, 10-4 Big East) meanwhile is slowly ascending the Big East standings thanks to a favorable schedule. That schedule takes a turn for the wicked this weekend, beginning with this trip to the Carrier Dome and followed by home games against Cincinnati and Notre Dame. Winning on Saturday is essential for both schools.

Thanks to its streaky record this season, #21 Notre Dame (22-6, 10-5 Big East) needs wins to impress as well as climb the Big East ladder. The Irish has fared well of late but #22 Marquette (20-7, 11-4 Big East) has proved a tricky opponent. Whichever side loses will be out of the regular season picture and the road to a Big East title will be that much tougher.

#8 Florida (22-4, 12-2 SEC) has been the class of the SEC this season but losses to Arkansas and Missouri means the conference is still there to be lost. After traveling to Tennessee on Tuesday, the Gators will host Alabama (18-9, 10-4 SEC) on Saturday. The Crimson Tide is currently two games back of Florida (and tied with Kentucky) so a win this weekend would be huge. In all likelihood, the regular season title will go to Florida, but with a trip to Kentucky still on the schedule, the Gators can’t afford to lose.

A win for UCLA (20-7, 10-4 Pac-12) on Wednesday night against Arizona State would see the Bruins enter this game with an identical record to Arizona (23-4, 11-4 Pac-12). That record could be – depending on Oregon’s result against Oregon State on Friday – enough to top the Pac-12. Add to that the fact that the Bruins defeated the Wildcats 84-73 on Jan. 24 and you have the recipe for a game Arizona must not lose. If the Wildcats do drop this one, it’ll be tough to win the regular season title.

Losing to Saint Louis for a second time this season this past Friday was a huge blow for #20 Butler (22-6, 9-4 A10). Now the Bulldogs face a Virginia Commonwealth (22-6, 10-3 A10) side that, along with the Billikens, sits above them in the Atlantic 10 standings. A Butler loss on Saturday would be fatal.

We have to wait until Sunday to enjoy the second biggest game of the week, when Michigan State (22-6, 11-4 Big Ten) travels to Ann Arbor to take on Michigan (23-4, 10-4 Big Ten). Back-to-back losses to Indiana and Ohio State last week means the Spartans are only one-half game ahead of their bitter rivals, while Michigan has won two straight since falling to Michigan State. Michigan will need to avoid a slip-up against Penn State on Wednesday before taking to the court on Sunday. The Wolverines are unbeaten at home, which adds another dimension to this one. It’s not quite winner takes all, but it’s not far off.

Worth Keeping an Eye On

If we’ve learned nothing else this season, we’ve certainly learned that nothing can be taken for granted in college basketball. Here’s a choice selection of games that could prove interesting this week. Whilst we expect the ranked sides to come out of these games with the ‘W’, that upset bug could strike at any time.