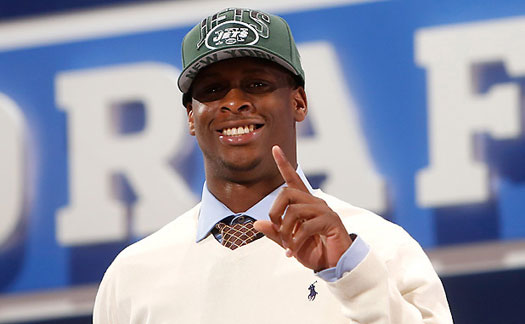 After an eventful, but mostly surprising day one of the 2013 NFL draft, the league’s 32 teams were back at it on Friday, searching for the most valuable players in the second and third rounds.

Many players who had fallen below their predicted spots finally landed with NFL teams; including Geno Smith, who was picked by the Jets; and Manti Te’o, who was snatched up by the San Diego Chargers.

One team that seemed to stand out was the Buffalo Bills, who added to their fine 2013 draft so far by adding USC’s speedy receiver Robert Woods and Oregon’s versatile linebacker Kiko Alonso. The Bills selected the only quarterback on day 1 – Florida State standout E.J. Manuel.

Though we saw a definite uptick in the amount of skill players chosen on day 2 – including Montee Ball, who landed with Denver and Eddie Lacy, who was picked by Green Bay – it was still a drab day for quarterbacks, as Matt Barkley, Ryan Nassib, Landry Jones and Tyler Wilson were left on the board at the end of round three. Tampa Bay grabbed a quarterback in round 3, but it skipped over the aforementioned college stars and took Mike Glennon from N.C. State instead.

There was certainly plenty of buzz surrounding some of the familiar names that weren’t being called, but one name that was called had everyone talking and that was Tyrann Mathieu, formerly of LSU. The Cardinals were the team that decided to take a chance on Mathieu – also known as “The Honey Badger” – in the third round. Of course, Mathieu endured a year of hardship after being kicked off the LSU team for off-the-field issues related to drug use, and for a period, it looked like he had blown any shot at a pro career. However, the visibly emotional Mathieu said he was a changed man and the Cardinals felt his talent was worth giving him a chance to prove he could be a professional.

There was certainly much more to talk about after day 2, but there are still plenty of solid prospects left on the board and we’ll be glued to the coverage again today to see where they end up. As we’ve seen before with the likes of Tom Brady and Zach Thomas, the third day of the draft can still yield hall-of-fame worthy talent, so every pick matters.