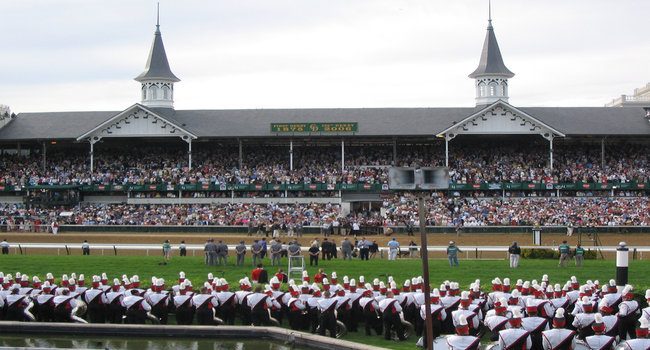 The Kentucky Derby has really become much more than just a horse race. It truly is a slice of Americana at its’ absolute finest. Where else can you find 170,000 people packed into relatively small area for two minutes of action? The Derby is everything we love about the country in which we live. There will be live music, plenty of alcohol especially in the form of mint juleps and there is great tradition.

From the call to the gate to the intense final turn where these amazing animals are headed for home, the Kentucky Derby allows us an opportunity to wager in a manner that is rarely if ever seen. The athletes today have not been paid multi-million dollar contracts nor have they received lucrative endorsement deals. Their pay-off is in the form of oats and a maybe a carrot or two and to be honest, they could care less if you wager on them or not.

Granted these are not your average horses. They are treated like precious gems and well they should be because their value is often worth more than most fine jewelry. Some would argue they are often trained too hard and that they are so physically ‘tuned up’ that they become overly fragile. Regardless of these factors, our job is to evaluate the horses, their trainers and their jockeys as the 139th Run for the Roses is ready to go later this afternoon.

Derby Notes: If you’re looking for the slightest little thing to alter your wagering plans here’s thought… Since 1900, the gate positions of one and five have accounted for 22% of the winners. In those spots respectively today are Black Onyx who has since been scratched and Normandy Invasion who is currently listed at 5-1. Look ahead to the Preakness by checking out www.preaknessstakesbetting.org as the winner looks ahead to stage two of the Triple Crown.

Breaking Down the Favorites

Borel is searching for his fourth Derby win.

Orb – The Derby favorite is currently going at 7/2 and in his two prep races has two victories with the most recent win coming at the Florida Derby. The trainer Shug McGaughey is a native of Lexington but has not won a Kentucky Derby and this appears to be his best shot. Jockey Joel Rosario had had a very distinguished career to this point and has raced at Churchill Downs before but is seeking his first win.

Revolutionary – At 10/1 Revolutionary is one of the favorites today simply because of the experience at both jockey and trainer. Calvin Borel is on the mount at the Derby again where has won three times. Trainer Todd Pletcher has won one Derby but has had tremendous success across the world of horse racing. This horse had two warm-ups finishing first in both.

Verrazano – Another Todd Pletcher-trained horse, Verrazano comes in with a first and a second in his prep races with the win coming at the Wood Memorial. On the mount is John Velazquez who rode Animal Kingdom to a Derby win in 2011. This horse is currently at 4/1 and will race from the 16th post position.

Goldencents – I profiled this horse on Thursday because he is loaded with all kinds of storylines. From one of his owners being Rick Pitino to his jockey Kevin Krigger aiming to become the first African-American Winner in over 100 years, this horse would be an amazing story as a winner. He is going from the 8th position and is currently listed at 5/1.

Don’t count out… Oxbow. Trained by legendary D. Wayne Lukas and ridden by three-time Derby champion Gary Stevens, he has some good finishes in prep races… Normandy Invasion. Sitting in the prized 5th slot, this horse is far from a long-shot at 12-1 but could certainly come up roses. He has two 2nd place finishes in his two prep races.

My Prediction: I hate going against a guy who has had the type of run Rick Pitino has had recently but Goldencents will have a good run today himself but it won’t be for the win. I find the combination of Stevens and Lukas tough to beat on Oxbow, but the horse I like today is Revolutionary with Calvin Borel gunning for a 4th Derby title. I like Revolutionary, Oxbow and Goldencents today.