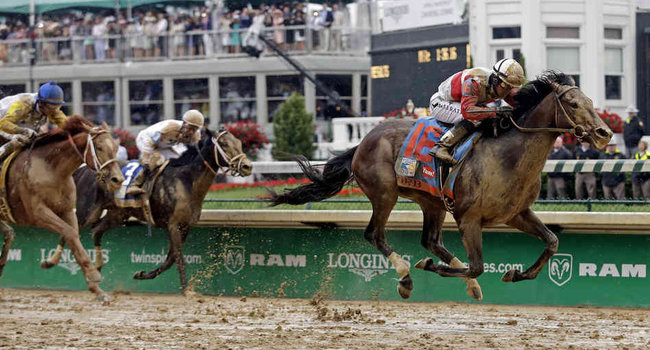 The 138th Preakness Stakes will be off and running this Saturday in Baltimore at Pimlico Race Track with just nine entries as of this posting. That is down significantly from the 19 that ran at Churchill Downs in the Kentucky Derby.

Derby winner Orb enters as the favorite. After looking more like just another ‘also-ran’ through the first portion of the race, Orb came on strong and passed then-leader Normandy Invasion as if the horse were standing still. Orb ended up winning the roses by three lengths ahead of Golden Soul. Revolutionary took third place.

Obviously the big question entering the second of the three Triple Crown races is “Can Orb take the next step towards a Triple Crown?”

My immediate thought is “why not?” This horse showed the ability travel a long ways and then still have the stamina at the end. The horse also is streaking too. Orb has won five straight races now and is unbeaten in the 2013 year.

Jockey Joel Rosario is a veteran with over 1,000 wins but has only raced in the Preakness Stakes on one other occasion. Is that enough to scare off some potential wagers in Orb’s direction? Personally I don’t think it is. This guy just pulled off an expected, yet big win in the slop and cool temperatures of Lousiville two weeks ago and now will run for the Preakness title in very favorable conditions of 75 degrees and partly cloudy.

With just eight other contenders on the track, Orb will have much less traffic to deal with and will obviously not have to come all the way from the 16th post position as he did in the Derby. While Orb will no doubt be a significant favorite heading to the gate Saturday afternoon that doesn’t mean that other horses are just going to stop along the rails and beg for apples.

Legendary trainer D. Wayne Lukas has three horses entered in the Preakness including Oxbow who finished 6th at Churchill Downs. Oxbow was actually right with Normandy Invasion about the time Orb came crusing past on his way to the win. Veteran jockey Gary Stevens will be aboard Oxbow and he is no stranger to success at Pimlico as he has two wins and two second place finishes as well.

Will Take Charge is another Lukas horse and stablemate of Oxbow who finished 8th in the Derby. If you look at his list of most recent events you’ll see it’s kind of feast or famine for this horse. In his four races this year, Will Take Charge has a first, a sixth a first and an eighth. Lukas has another hall of fame jockey on this mount in 47-year old Mike Smith. That pattern of finishes is hard to ignore if I’m wagering.

One of the horses that received a ton of attention prior to the Kentucky Derby was Goldencents who disappointed greatly by finishing 17th. This is a horse that in his previous four races had three wins and a fourth place finish. Goldencents started strong in the Derby but quickly faded which makes me wonder how jockey Kevin Krigger will take him out on Saturday.

As of right now, I just don’t see a horse that makes me want to move my money off of Orb. Make sure you get over to www.preaknessstakesbetting.org for the latest Preakness Stakes action that I can’t deliver you. Redemption will certianly be the order of the day for Goldencents but I’m not convinced he’ll be ready. Stay with Orb right now and check back in with me on Saturday.