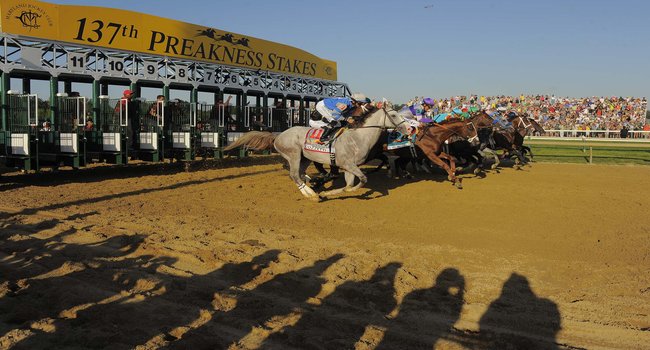 It’s hard to imagine but the Kentucky Derby field of 19 horses has been reduced by more than half for the 138th running of the Preakness Stakes today outside Baltimore, Maryland. Just nine horses are in the field as of this writing and Kentucky Derby winner Orb is an overwhelming favorite to win the second leg of the Triple Crown.

Conditions for the late afternoon start at Pimlico Race Track appear to be ideal. The temperature is predicted to be in the mid seventies with little if any chance for rain. The track conditions are currently listed as fast with the turf conditions stated as firm. For all things “Preakness,” make  sure you check out www.preaknessstakesbetting.org after you read my predictions.

Here’s a brief write-up for each of the horses in today’s event. (Starting from the first post position.)

Orb 1/1 – The Kentucky Derby champion is the clear-cut favorite with Joel Rosario once again on board. Common sense would have to tell you that if Orb ran as well as he did in the Derby in those cool, rainy and muddy conditions then he should do even better here. The biggest difference for Orb and Rosario is that they are on the inside whereas they came from the 16th position at Churchill Downs.

Goldencents 8/1 – The Rick Pitino co-owned horse was extremely disappointing in the Kentucky Derby finishing 17th. I had he and jockey Kevin Krigger picked to take third so I wasn’t the only one they let down. The good news is that Goldencents will certainly do better than 17th, but my confidence in him shaken right now.

Titletown Five 30/1 – The longest shot of any of the nine horses in the field, Titletown Five will be a sentimental favorite for any Green Bay Packers’ fans out there betting the ponies this weekend. Co-owned by Paul Hornung and Willie Davis, jockey Julien Leparoux will be wearing the colors of green and gold while on the mount. In three races this year, the horse has finishes of fourth, ninth and second. His last four races in 2012 were first, second, fourth and third.

Departing 6/1 – This horse’s last five races have finished with four firsts and one third place. While this will be a greater test for the horse in terms of length, it’s hard to ignore those credentials. His third place finish came behind Mylute and Revolutionary who both are in the field and had strong Derby finishes as well.

Mylute 5/1 – Rosie Napravnik is coming off a great run in the Derby aboard Mylute as she finished fifth. This horse has raced ten times in the last calendar year and has two wins, two second-places and two third-places among those. This is Napravnik’s first ever go in the Preakness but she should be able to handle the attention.

Oxbow 15/1 –  Hall of Fame jockey Gary Stevens takes the mount on Oxbow who has been a very busy horse this year. This will be Oxbow’s sixth race of the 2013 year and is one of trainer D. Wayne Lukas’ three entries in the field. Stevens has twice won this event and is no stranger to the pressures of the Triple Crown events which should help ease Oxbow.

Governor Charlie 12/1 – Trained by Hall of Famer Bob Baffert, Governor Charlie has three races under his belt and that’s it. His finishes however are impressive as he earned two wins and a runner-up finish.

It’s My Lucky Day 10/1 – In 11 events dating back to June of 2012, this horse had five wins in those races. His lowest finish was a sixth place showing until the Kentucky Derby happened. Clearly the conditions and the distance affect the horse as he struggled to a 15th place finish.