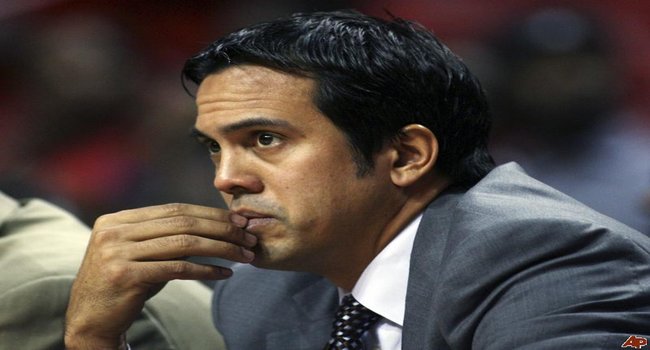 I have to give Indiana Pacers’ Head Coach Frank Vogel and his team credit. There was no way I saw them bouncing back from that game one heartbreaker in which Vogel left big man Roy Hibbert on the bench in the defining moments of the game. They proved me wrong however as Hibbert cam up huge while LeBron James turned it over twice in the final seconds to give the Pacers a 97-93 win in Miami.

The win gives the Pacers home-court now with five games remaining in the series and that’s nothing to take lightly. Just ask the New York Knicks who couldn’t beat the Pacers at home in Indy. I’m not suggesting the defending champs can’t win on the Pacers’ home floor, but it isn’t going to be easy by any stretch.

The reigning MVP can say all he wants to that he and the rest of the Heat will not vary from their normal gameplan of driving to the hoop against Hibbert, but the numbers are saying otherwise. In game two, the Heat were just eight of 20 on drives to the goal with Hibbert in the game. With Hibbert out, James himself was four of five. They can talk all they want to about Hibbert not changing things for them but clearly he does.

Secondly, James had a great game last night scoring 36 points and grabbing eight rebounds but he knows like everyone else that failed to come through down the stretch. This was always thought to be something that haunted him in the past but not anymore. Yes, it was only one game and even Michael Jordan had these games, but James had two opportunities in the final seconds and failed miserably.

While I don’t think anyone will mistake his one-on-one match-up with Paul George with the great Bird-Dr.J hook-ups of the 1980’s, this was certainly for one night a great reminder of those days. Each guy seemingly matched the other as the two competitors stared each other down at times as if it were an old west gunfight. James has his way with George for most of the game but then George held him scoreless from the field over the final three minutes.

I expect game three to be an absolute brawl and you should too.

In Memphis tonight, the Grizzlies face what I would call another ‘must-win’ game. I say another because I really felt that game two was must win as well. Give the Griz credit thought as they fought back from 18 down in the 3rd quarter, but they still lost the game. There is one ray of hope for Memphis tonight and that’s previous history.

Last year, the San Antonio Spurs took the first two games from the up and coming Oklahoma City Thunder and looked like they had total control of the series. Kevin Durant and the Thunder went on to win four straight games in advancing to the NBA Finals. Granted, even just a year later, many things are different, but it’s certainly worth noting.

If the Grizzlies are going to make this a series, it has to be because of Zach Randolph. The Memphis big man has been less than stellar in the first two games and his shooting must improve for them to have any chance. While his shooting did improve slightly from game one to game two, he was still missing many high percentage shots.

For the Spurs, it’s business as usual. Keep getting contributions from Danny Green and Kahwi Leonard while Duncan, Parker and Ginobili do their thing. San Antonio enters as a five-point dog tonight but I sense a Memphis blowout this evening. Take the Griz outright at home in their “Grindhouse.”