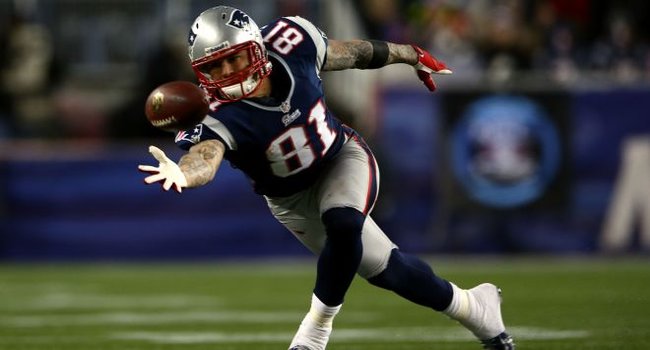 The police in Massachusettes yesterday arrested Aaron Hernandez taking him in cuffs from his home around 9am. Within about 90 minutes, the New England Patriots cut ties with Hernandez by releasing him. This signaled that the Pats’ felt this was more than just an obstruction of justice charge and they were right. Hernandez was charged with six felonies including first-degree murder and the store inside of Gillette Stadium had already removed everything related to Hernandez from their shelves.

Regardless of what comes out of the pending Aaron Hernandez trial, a troubling trend has continued in the world of professional athletics and in the NFL in particular. Back in 2000, Baltimore Ravens’ star Ray Lewis was involved in a double-murder yet to what extent no one will ever know. He eventually plead to a charge of obstruction of justice which ironically is what Hernandez was facing before the murder charge was filed. Like the current case, Lewis’ had evidence come up missing or had evidence tampered with as well but this isn’t the point.

Over the last 13 years since the Lewis incident, we have seen similar brushes with the law with NFL players in which they are surrounded by their ‘friends.’ From Adam ‘Pacman’ Jones to Michael Vick to the infamous Vikings’ cruise, we have seen players surround themselves with people they believe to be their friends yet take advantage of them and their celebrity.

What is sad is that many of these individuals who find themselves part of an athlete’s ‘entourage’ are in fact lifelong friends who are genuinely wanted to be around but what is occurring is that these friends are taking advantage of the wealth and privilege of their professional football playing friends.

In the current situation with Aaron Hernandez, many things have been coming to light about his past and none of them appear to be good. This current investigation may in fact be Hernandez’s third incident involving a shooting and there has been significant links to gang activity as well.

While having former players like LaVarr Arrington and Desmond Howard there were positive moves as was the addition of Niners’ tight end Vernon Davis who has matured a lot in his time in the league, the NFL still doesn’t do enough to make guys aware of what dangers are out there lurking. To their credit, the league did address the rookies in terms of sexual harassment and abuse but players still don’t understand how easily they can find themselves in a heap of trouble.

NFL players must recognize who their friends are versus who their ‘acquaintances’ are because the distinction can often be the difference between having a successful, long-term NFL career and one littered with poor judgement. When Michael Vick’s dog-fighting operation was discovered, the majority of people involved in it with him were lifelong friends. Did none of these guys understand what they were doing was wrong? The culture for so many of these players is to put their friends above everything else. It’s often admirable, but at the same time it’s also dangerous and leads to the problems that are facing Aaron Hernandez today.