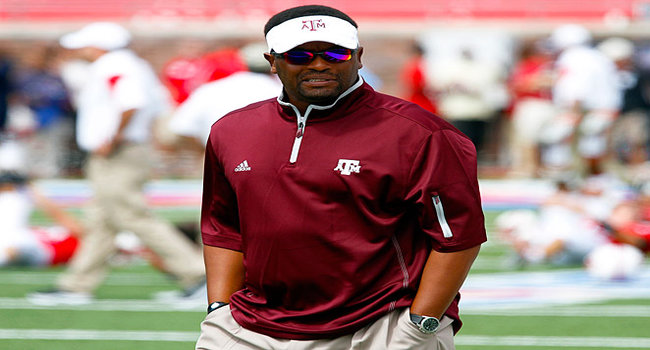 When last we saw the Texas A&M football team the Aggies were coming off the field in Cowboys Stadium following a 41-13 thrashing of Oklahoma in the Cotton Bowl. The victory was the ultimate ‘cherry-on-top’ of an 11-2 season highlighted by their inaugural season in the Southeastern Conference, a win at #1 Alabama and of course a only the school’s second Heisman trophy winner in Johnny Manziel.

The offseason started decently enough despite quarterbacks’ coach Kliff Kingsbury leaving to become the Head Coach at Texas Tech. He was replaced by a former colleague and excellent QB coach in his own right Jake Spavital who will be looked on to further the career of Manziel.

Then for some reason things have suddenly gone a bit wrong down in College Station.

A week ago in this space I discussed Manziel and his chances for a Heisman repeat. This came on the heels of an incident where Manziel tweeted “he couldn’t wait to get out of College Station. ” This immediately sent the college football world into whirlwind of activity and speculation. As we soon came to find out, Manziel was merely expressing his frustration over getting a parking ticket on campus. I’ve been there before so I get his feelings but I’m not sure Manziel really understands just yet how much of a microscope he is now under compared to this time last year.

The news didn’t stop there though. Soon after, information was discovered that prior to his Heisman-winning campaign, he was very nearly suspended by the University for the season.

Earlier in the year, Manziel was part of a bar fight in which he was found to be in possession of a fake I.D. This isn’t taken lightly at many schools but Texas A&M isn’t one of them as they are known for firmer discipline. Manziel was ready to transfer as he confirmed in a story with Texas Monthly. Cooler heads eventually prevailed as Head Coach Kevin Sumlin was able to convince the University that the discipline Manziel was facing through the athletic department was more than enough punishment.

What his comeuppance was is anyone’s guess but it doesn’t look good especially in this day of the pampered college athlete. Manziel recently announced he was ‘taking a break from twitter’ in order to avoid distractions. While he may be avoiding them, his teammates are not.

Two projected starters on the defensive side of the ball turned themselves in this week and are facing charges of assault in Brazos County, Texas. According to reports, Floyd Raven, Sr. and Deshazor Everett were involved in a fight at a bar which later moved to an apartment complex where Everett lived.

The report states that two other men were upset about being sprayed with champagne by the two Aggies’ players and things then escalated outside. They are currently suspended from all team activities.

There’s a very good chance this all just ‘boys being boys’ but whatever it is, it doesn’t look good.

Texas A&M has a long tradition of football but over the last ten years or so, the team has been quite mediocre. With Sumlin coming over from a very successful stint at the University of Houston and orchestrating an 11-2 season, there is tremendous pressure and attention now.

A&M is pushing forward with a major renovation to Kyle Field. The construction will start after this season and by 2015 the stadium could hold as many 109,000 fans which would be second only to Michigan. It would easily be the largest stadium in the SEC.

With so much going on in College Station, I have to wonder if the Aggies can repeat their success or improve on last year’s record. Right now I’m inclined to say “no.”