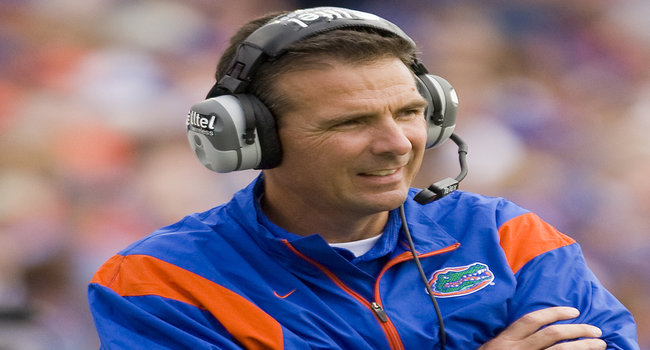 If you had money on current Ohio State Head Football Coach Urban Meyer speaking up before National Football League Commissioner Roger Goodell would then you are the big winner! Collect your prize at the door on the way out and thanks for playing!

The former Univeristy of Florida head coach broke his silence regarding former Gator Aaron Hernandez’s arrest on murder and gun-related charges in the June death of Hernandez’s ‘friend’ Odin Lloyd. Why Meyer would be required to speak on the issue at all is only because of the attention to Hernandez’s time in Gainesville as a member of the football program that won two national titles under Meyer.

It’s been reported by numerous media outlets that Hernandez failed numerous drug tests at Florida but they were covered up. Meyer’s text message to the Columbus Dispatch is that, “Hernandez was held to the same drug testing policy as every other player.” Take from that what you will but a bigger picture has emerged about Meyer’s tenure at Florida.

The New York Times’ Greg Bishop reported that there were 31 arrests at Florida while Urban Meyer was the head coach from 2005 through 2010. One of the major incidents during Meyer’s coaching career in the blue and orange came in 2007. Aaron Hernandez was a 17-year old freshman who may have been involved in a shooting outside a nightclub that left two men wounded.

According to ESPN’s “Outside the Lines,” police in Boston are working with police in Gainseville in an attempt to find out just what Hernandez’s level of involvement was in the incident. Two other former Gators that were allegedly present were Tim Tebow and Maurkice Pouncey. Tebow in a bar with Hernandez? I can’t imagine it either…

Regardless of Hernandez’s involvement in that case, Meyer has now put himself out there in defense of his Florida years. Perhaps the biggest indictment of Meyer running a less than stand-up program came from often troubled Gators’ defensive back Janoris Jenkins. Jenkins, who is now with the St. Louis Rams in the NFL, played for Coach Meyer but was kicked off the team when new coach Bill Muschamp came to Gainesville.

In a 2011 article in the Orlando Sentinel, Jenkins basically outed Meyer after he was booted from the team. “No doubt, if Coach Meyer were still coaching, I’d still be playing for the Gators,” says Jenkins, a star cornerback and a potential first-round draft pick whom Muschamp booted from UF’s team after being arrested twice for possession of marijuana during the offseason. “Coach Meyer knows what it takes to win.”

That isn’t exactly a ringing endorsement. It appears both Meyer and the University of Florida put winning and the almighty dollar ahead of anything having to do with the word ‘discipline.’

So where does this leave the Ohio State University? For right now, it leaves them unaffected. The problem is that OSU is already coming off a period of probation because a head coach known for ‘discipline’ did nothing to stop his players from getting tattoos in exchange for memorabilia. Expectations are extremely high for the Buckeyes who come off a 12-0 season. They are ranked in the top five of many preseason polls and are favored to play for the Big Ten Championship.

Should the Hernandez investigation open more ‘Pandora’s Boxes’ that further implicate Meyer as a guy who didn’t have control over his Gators, then it could get ugly again in Columbus. The passionate OSU fan base doesn’t deserve another major crisis in the football program but winning apparently is everything in college football today. Be careful on futures’ wagering with the Buckeyes as this story unfolds.