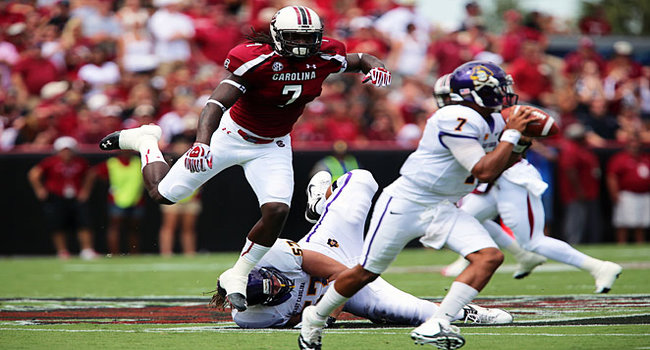 Because odds are still being calculated in many cases for the opening weekend of college football I’m not going to get into those in this article. Remember, there are still a host of teams, USC among them, that have yet to name a starting quarterback. Those decisions will have an impact on how the sports books formulate the lines for the opening games.

That doesn’t mean I can’t take a look at some of the top match-ups on tap for the final weekend of August as college football kicks off.

North Carolina at South Carolina – There any number of people who have the Tar Heels selected to play in the ACC Title game in December. QB Bryn Renner is back and the recruiting has been very solid the last couple of years. The Gamecocks are interesting here because the following week, they play at Georgia. That game will more than likely decide the SEC East with all due respect to Florida. That said, I still like the overall firepower or the Gamecocks in this one.

Mississippi at Vanderbilt – The Commodores and Rebels open the season with an SEC clash right out of the gate. Last year Vandy went 9-4 but has seen five different players subjected to disciplinary action recently. Ole Miss is coming off a shocking haul in recruiting that landed them the nation’s number one defensive prospect in Robert Nkemdiche. I think the Rebels will go into Nashville and get a win with all the distractions going on there.

Texas Tech at SMU – If you’re a running back, you might be used for pass protection and receiving only as these two pass-happy teams hook up. June Jones’ Mustangs will be a challenge for new Red Raiders’ Head Coach Kliff Kingsbury who brings a ton of experience with the spread into Lubbock. Take Tech simply because I think they have a few more athletes than the Mustangs.

Rice at Texas A&M – With all due respect to the Owls, the Aggies will win this game handily. The reason it’s a game to watch is to see who is under center for the A&M when the offense takes to the field. Will the University take a risk and play Johnny Manziel or will they keep him out while the NCAA investigates any wrong-doing on his part? There will be eyes all over the country watching College Station and especially those in Tuscaloosa.

Mississippi State vs. Oklahoma State (Game played in Houston) – Cowboys Head Coach Mike Gundy announced this week that he’ll go with two quarterbacks against the Bulldogs. Both Clint Chelf and J.W. Walsh will be seeing plenty of action. These two guys both threw for over 1,500 yards last season and offer different skill sets in having to make Mississippi State prepare for both. Dan Mullen’s Bulldogs were 7-0 last year and finished 8-5. QB Tyler Russell returns to help avoid a late season slide. My gut leans with the Cowboys right now in a close game.

Alabama vs. Virginia Tech (Game played in Atlanta) – The two-time defending National Champions go for the three-peat and it starts in Atlanta against a very good Hokies’ team. Many people are already chalking up the win for the Crimson Tide and I can see why but Va Tech returns QB Logan Thomas and probably the best defense in the ACC. Nick Saban has won every season-opening game since he arrived in Tuscaloosa and I don’t see it changing here. With T.J Yeldon, Amari Cooper and A.J. McCarron on offense and speed to burn on defense, the Tide should roll past the Hokies in a game that will be closer than some imagine.