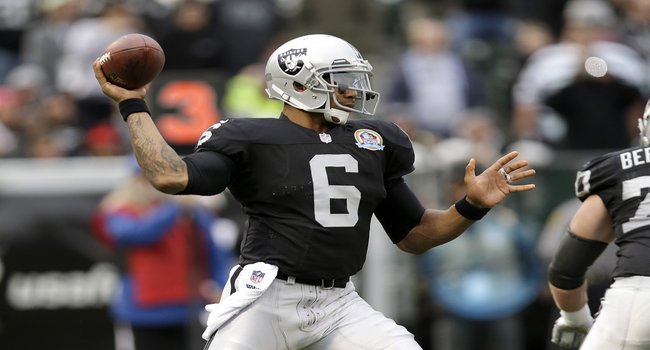 The third week of the National Football League preseason is in the books and what that essentially means is that most of the game’s top players and starters will not be seen again until week one of the regular season. Week four of the preseason is nothing more than a final opportunity for those guys who are battling for final roster spots.

That doesn’t mean I can’t focus on some of the major questions facing quarterbacks as the preseason comes to an end (thankfully).

Quarterback Issues in Oakland, New York and Buffalo – Quarterback controversies in the preseason are as common as a laugh at Rex Ryan press conference. What do you know? That’s what we have in this case as the Jets are facing a serious issue at quarterback. Ryan inserted Mark Sanchez into the game this past weekend in the fourth quarter only for him to get hurt.

It was a foolish and reckless decision by Ryan who will not be the head coach of this team next year barring a miracle. Sanchez’ competition is rookie Geno Smith who was rushed back from an ankle sprain. All Smith did was throw three interceptions in the first half against the Giants. In doing so, he basically handed the job to Sanchez. If you told me Ryan was ‘forced’ to put Sanchez in late in the game, I wouldn’t disagree with you.

In Buffalo, E.J. Manuel has been on the shelf for two weeks following a minor knee surgery. That was thought to give veteran Kevin Kolb a line on the starting job. Well, not so much. Kolb suffered a concussion on Saturday against Washington and reports are surfacing that this could be a much more serious head injury than previously thought.

With only rookie Jeff Tuel remaining, the Bills signed Matt Leinart and picked up Thad Lewis in a trade with Detroit. There is no guarantee that Manuel will be ready for the opener so what was once so promising a start for these Bills may be yet another troubling season in Buffalo.

Out west, Oakland was thought to have its’ man in Matt Flynn but then again Seattle thought that about Flynn as well last season. Now the Raiders aren’t so sure. This week, ironically against the Seahawks, Flynn will not get the start. Terrell Pryor gets the nod in what the Raiders are calling more of a ‘rest’ for Matt Flynn.

I’m not buying that. I think this is a major opportunity for Pryor who runs better and is more mobile which is huge considering the Raiders’ porous offensive line. Pryor won’t see many of the starters from Seattle’s defense but make no mistake that a good performance from him may garner a start in the opener.

I’d be absolutely out of my mind if I didn’t mention one other quarterback situation where there is no controversy for the starting position. The controversy here is who will be the back-up in New England? Head Coach Bill Belichick normally keeps only two quarterbacks on the roster and while both Tim Tebow and Ryan Mallett have been equally bad this preseason, which direction will Belichick go?

Tebow did not see the field in the third preseason game which isn’t totally abnormal but still factors into what Belichick might be thinking. I don’t think you’ll see Tebow cut when the first round of cuts are due by tomorrow. That doesn’t mean he will make the team however. Tom Brady will more than likely not play in the final preseason game so I expect Mallett and Tebow to get the bulk of the snaps. Even if Tebow plays well, that doesn’t guarantee a roster spot.