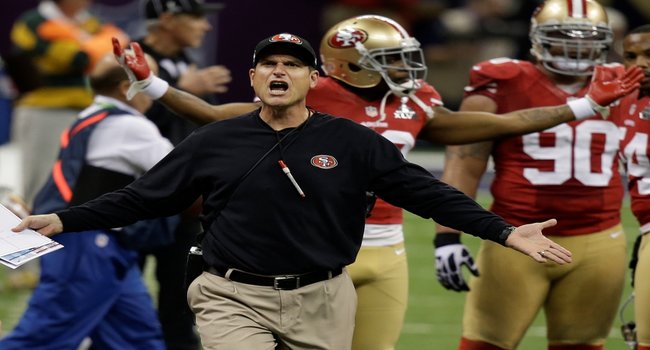 San Francisco 49ers’ Head Coach Jim Harbaugh is known to National Football League fans as a very good football coach. He is also known as a total whiner and looks like a toddler throwing a temper-tantrum on the sideline nearly every week. Just when I thought the NFL was ready to turn a corner with the recently settled lawsuit pertaining to head injuries, I was wrong.

Coach Harbaugh was obviously upset about the comments this week by Green Bay linebacker Clay Matthews. The all-pro player was asked on ESPN’s Mike and Mike about playing against teams that run the read option in terms of how to stop it. His answer was straight out of previous decades of pro football and did not even create the slightest reaction from either Mike Greenberg or Mike Golic. The following were Matthews’ comments…

“One of the things that the referees have told us is that when these quarterbacks carry out the fakes, they lose their right as a quarterback, a pocket-passing quarterback, the protection of a quarterback,” Matthews said. “So with that, you do have to take your shots on the quarterback, and obviously they’re too important to their offense.

“If that means they pull them out of that type of offense and make them run a traditional, drop-back, pocket-style offense, I think that’s exactly what we’re going for. So you want to put hits as early and often on the quarterback and make them uncomfortable.”

What Matthews said is no different than the late Raiders’ coach and owner Al Davis used to tell his team. “The other team’s quarterback must go down.” I don’t recall opposing coaches whining about that statement. The difference between the two ideas that Davis’ comments were in general and Matthews’ were in regard to a specific offensive play.

Harbaugh took Matthews’ comments as if he were stating that Niners’ QB Colin Kaepernick was the one being targeted and then when on to compare what was said to Bounty Gate.

According to the rules on hitting a quarterback, if he should be part of such a play where he is carrying out a fake, and this what QBs who run the read-option do, they are allowed to be hit. Pretty plain and simple as far as I’m concerned.

Packers’ Head Coach Mike McCarthy added, “The reality is, the quarterback is part of the option,” McCarthy said. “There’s three options obviously: the quarterback, the dive and the pitch. The ability to go tackle that player is obviously within the rules.”

That’s it right there in a nice, tidy nutshell but just watch. I can almost guarantee that one of the Packers will get nailed for unnecessary roughness for hitting Kaepernick. The league, despite settling its’ concussion lawsuit with former players, will continue to the defense out of the game and make it more and more simple for the offense to score points and score them at will.

In some ways what Harbaugh is doing is no different than an NBA coach talking about his guys getting pounded on by a more aggressive team in the hopes that the officials hear it and then act on it. No one is accusing Harbaugh of being stupid here, but on the heels of the concussion settlement, this just sounds like typical whining.

If the NFL begins to eliminate hitting the quarterback on the read-option then the defense may as well not bother showing up for games. At this point, what more could the league take away from them?

Another sad commentary on the direction of this once proud league.