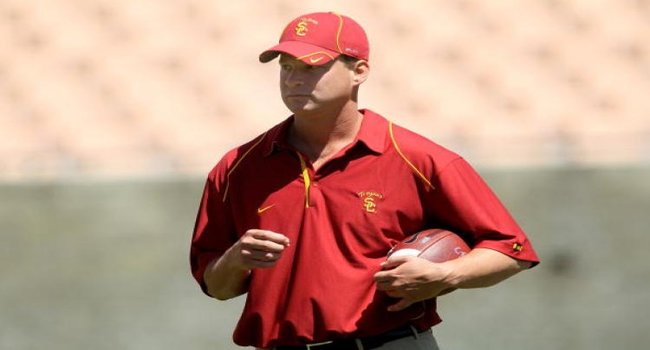 For many years Lane Kiffin was perceived as a person who was not exactly the most honest and friendly guy in the world of coaching. Ask the Oakland Raiders or Tennessee Volunteers and they can probably confirm those suspicions. As of early Sunday morning, the USC Trojans can claim they probably know of his short-comings as well as the University fired him following the team’s blowout loss to Arizona State.

Far be it for me to defend Lane Kiffin but USC officials actually told Kiffin to find his own way home from LAX at 3am. The team went on ahead while the fired coach found his own way. Athletic Director Pat Haden has always been known to be a stand-up guy but if he is the person responsible for Kiffin being left at the airport then shame on him.

Former assistant and Ole Miss Head coach Ed Orgeron has been named the interim coach and former Trojans’ player Jack Del Rio has been tabbed as a top candidate for the job. He is currently the defensive coordinator for the Denver Broncos.

I was surprised Kiffin was even hired in the first place at USC considering his less than stellar reputation but they hired him anyway. Perhaps he has been a stooge all along put in place just to help the Trojans get through some NCAA sanctions. Either way, I’d be surprised to see Kiffin get a head job any time in the near future.

The Southeastern Conference has long prided itself as one of the great defensive conferences in the nation but that trend seems to being dying a swift death. Two weeks after Alabama and Texas A&M had a track meet in College Station, LSU and Georgia staged one of their own in Athens with the Bulldogs winning 44-41.

Not to be outdone were the Aggies who were hanging 45 on Arkansas while giving up 33 to the Razorbacks. So what gives? Well, it appears to me that the offensive skill positions in the SEC have caught up to the defensive skill positions at least for the time being. If you look at defenses like Bama, LSU and Georgia, they all suffered heavy losses through the NFL Draft and are playing lots of young and inexperienced guys.

To me, it’s nothing more than a cyclical thing. It won’t be but a few more years when we are watching 13-10 slugfests in the Deep South again.

Oregon and Stanford appear to be headed for yet another epic Pac-12 showdown on November 7th. The top two teams in the conference both put serious whippings on their opponents on Saturday with the Ducks beating Cal 55-16 and the Cardinal beating Washington State 55-17.

What could be shaping up could be very interesting for the final year of the Bowl Championship Series. Although it’s still early in the season, one of those two will eventually suffer a loss. We know Alabama will probably need to lose twice to lose a shot a the title game. That, or there need to be unbeaten teams in both the Pac-12 and Big Ten.

The point of the matter is that regardless of who wins the showdown in November, the loser is still not out of any discussion regarding the national title game unless one significantly blows out the other. There are many factors that could alter things but as for right now, the Oregon-Stanford game could end up being the biggest game of the season.

Until the next biggest game of the season happens of course….