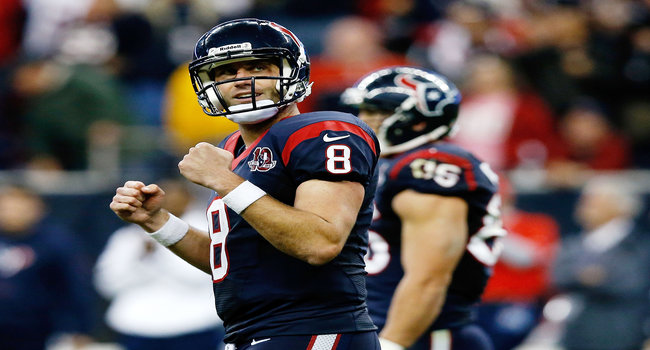 Somewhere along the way, we as people have forgotten that we are just fans. A small minority amongst the throng of fans of all teams and sports in this country are making themselves and the rest of us look foolish.

Case in point are the fans in Houston who cheered the injury to Texans’ starter Matt Schaub. Despite Schaub playing poorly for much of the season, it isn’t like he is out there doing it on purpose. Nevertheless, while the team was getting throttled by the Rams in Houston, fans cheered when he got injured.

They’ve been clamoring for T.J. Yates for a couple of weeks now and they got their wish. Proving karma is an absolute bitch, Yates threw a 98-yard pick-six. It was the fifth straight game in which a Texans’ QB has accomplished such a dubious feat.

This was a team that many thought would be a significant Super Bowl contender so I get the frustration. That said, cheering a player’s injury is atrocious and there’s no place for it.

Much of the NFL world grieved this week for the 2-year old son of Adrian Peterson who was killed by the child’s mother’s boyfriend in a domestic abuse situation. As is usual in these situations, people felt the need to chime in on whether he should play in Sunday’s game or not. Let me give you my opinion. It’s none of your freaking business.

We all cope with traumatic events differently but it’s how we as individuals cope with them that matters. Brett Favre played hours after his father’s sudden death. Baltimore’s Torrie Smith played just hours after his brother was killed. Peterson made the decision to play and regardless of the relationship he had or didn’t have with this child it isn’t our business on what he chooses to do.

Is it just me or is there something going on much deeper with Rob Gronkowski and the Patriots? ‘Gronk’ was thought to be ready to play yesterday against the Saints but was a no-go. To be fair, he has dealt with both forearm surgery and back issues so I don’t want to downplay those things in anyway.

The problem is that guys with much more severe injuries are already back on the field and are playing at a high level. A report came out yesterday that Gronk’s absence may be creating tension in the Patriots’ locker room.

I honestly don’t doubt that. Guys see him in the facility on a daily basis and have to wonder what his problem is if he looks so darn healthy. Some guys will interpret his actions one way while some will see it another. Either way, it has to be causing some consternation.

I’ve gone on record as saying I do not think the Redskins should be forced to change their name. I understand the term can be and has been used in a negative connotation but when you have a very small group in favor of change that doesn’t mean you do that.

It was announced this week that a local D.C. school was banning any Redskins’ apparel. Schools have a right to conduct policy as they see fit but in my opinion this will only cause more problems as kids bully each other over what they are or aren’t able to wear.

Eventually Daniel Snyder will be forced to change the name. You know it and I know it. It’s how politically correct our society has become. In fact I’ve heard schools aren’t even allowing kids to play ‘tag’ anymore!

Oh well, if anything, Snyder can use the name change to make a boatload of money as fans buy up the last of the Redskins’ merchandise. He’ll make a ton on people buying up the new logo too.