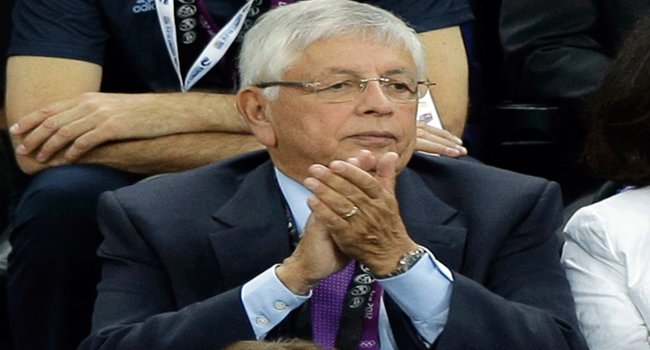 I was once told that the sun doesn’t shine on the same dog’s rear-end everyday because that’s just not how things worked. Sometimes you were fortunate and sometimes you weren’t. For newly retired National Basketball Association Commissioner David Stern, the was a very common sight during his tenure.

From 1984 through 2014, Stern presided over what can only be called “The Golden Age” of professional basketball.

Although many believe, and rightfully so, that professional basketball was starting a dramatic rise in popularity when Stern took over; it has been under his watchful eye that the game has exploded. When Stern took the reigns from former Commissioner Larry O’Brien, both Magic Johnson and Larry Bird were already in the league and each had a title to his credit.

Those two Hall of Famers were not only rising stars but they also happened to play for two of the most historic and celebrated franchises in NBA history (Los Angeles and Boston). Along with those two was the Philadelphia 76ers led by Dr. J. The three teams were dominant throughout the 1980’s while a young man named Michael Jordan was becoming the greatest player of all time in Chicago.

Stern presided over the 1980’s like a proud father watching his children grow into one fantastic thing after another. By the time the 1990’s rolled around Jordan was the most recognizable athlete on the planet and the NBA as a whole was garnering respect throughout the nation and the world.

There was never a better time to be running a sports league and Stern knew it. He took a very hands off approach and just let the players and teams do all the work. Unlike what we’ve seen in the NFL recently under Roger Goodell, Stern did very little to alter the way the game is played. He oversaw the introduction of a player dress code and the expansion of seven different NBA franchises.

Like any leader who serves that long, there were some down times and moments that still generate discussion today.

There are many both in and around the league that believe the 1985 NBA Draft Lottery was rigged to favor the New York Knicks. All-American Center Patrick Ewing was the overwhelming top pick that year and it was thought that any team getting him was destined for the playoffs and NBA Championships. The conspiracy centers around one of seven envelopes that was put into a hopper.

One of the seven clearly had a bend in the corner and that was the one he drew. It was thought this was rigged so that New York would be better and would increase TV ratings dramatically.

Still to this day there is rampant speculation that Michael Jordan’s brief retirement, in which he tried to play professional baseball, was actually a cover-up. Jordan was extremely well-known for his gambling prowess and there is a ton of belief that he was in serious trouble so Stern orchestrated a way for him to get out of the game awhile.

Stern also had to deal with on court brawls and perhaps the ugliest incident in pro sports when Ron Artest (known as Metta World Peace now) went into the stands at the palace of Auburn Hills creating a melee in which players and fans were brawling in the seats and on the court.

All things considered, Stern has been a very good commissioner. He has also seen the game become international both with the introduction of hundreds of foreign players but also in getting teams to play games abroad as well.

His Successor Adam Silver will be lucky to find the same success that he had during his tenure running the league.