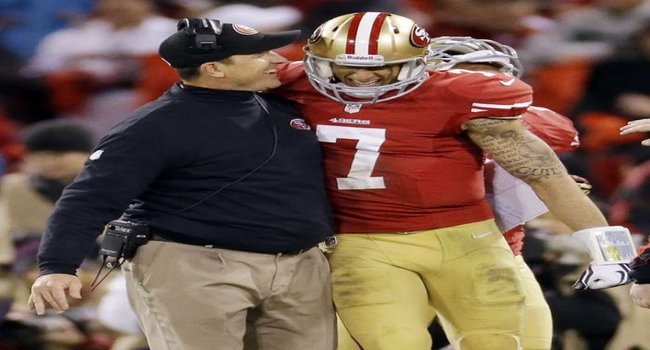 The last time a trade was made in the National Football League involving a head coach was when Oakland traded Head Coach Jon Gruden to Tampa Bay in 2002. If you’ll recall, late Raiders’ owner Al Davis had grown tired of Gruden’s West Coast offense and desired a more down-field passing game.

Gruden was traded for the Buccaneers’ first round draft picks in 2002 and 2003 plus a couple of second rounders and $8 million in cash. He would lead the Bucs to a Super Bowl Championship in his first season in Tampa Bay.

Apparently we were very close to having yet another head coach traded across the country as the Cleveland Browns admitted they flirted with trading for Jim Harbaugh of the San Francisco 49ers.

While the 49ers have claimed this either didn’t happen or never got serious, Browns’ owner Jimmy Haslem validated the stories that had been emerging about the potential trade.

My take is that the Browns did indeed poke around and explore the possibility but I don’t think it got all that serious. Cleveland would have been in a very good position with which to negotiate because of their numerous high picks over the next couple of years.

While Harbaugh himself called the story “Ridiculous,” would the move have really been that bad for him?

The Super Bowl window in San Francisco is closing. His quarterback Colin Kaepernick is a year away from a big contract and his defense is aging rapidly at many key positions. Anquan Boldin and Frank Gore are both on the down-side of their careers despite still putting up big numbers.

In Cleveland, the defense is young and has potential while the receiving corps is pretty talented. If Harbaugh could just take his QB with him, it wouldn’t be a bad deal if you really think about it.

Furthermore, one has to wonder why the 49ers would even consider the possibility although they are claiming they didn’t. Are they perhaps tired of the near misses? Are they embarrassed by his sideline antics?

Who knows? All I can say about this entire situation is that it isn’t happening so let’s move on.

San Diego State running back Adam Muema was projected to be a mid to late round draft pick in May’s NFL Draft. There’s a good chance he won’t get drafted at all after the leaving the combine before participating because ‘God’ told him to do so. I’m not in the business of telling anyone how or who or what to believe in so to each their own when it comes to religion.

It would have been one thing had Muema just said ‘God’ told him to leave and that were the end of it, but he took it further by saying “[God] told me to sit down, be quiet, and enjoy the peace,” according to U-T San Diego. Muema’s dream is apparently to play for the Seattle Seahawks and he is taking God’s message as the only way for that dream to come true.

The sad reality is that Muema is not only costing himself a shot at a decent NFL contract but he is potentially costing himself a chance to ever play pro football period. While there are certainly more important things than that out in the world, the sanity of Muema must be questioned.

I find it interesting that with all the focus on Johnny Manziel’s off-field antics and Michael Sam being gay, very little attention will be paid to a guy who probably needs the right kind of attention the most.