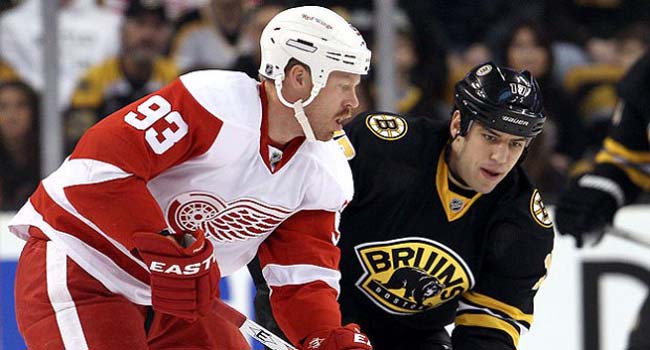 While I can accept that other sports offer dramatic finishes just as hockey does, those sports fail to deliver as often as the men on ice do. What I will not accept is an argument that says “our playoffs are better” because it is simply not true.

The National Basketball Association and Major League Baseball give us dramatic five and seven game series’ but how often do their seventh games live up to the excitement of a game seven in the NHL?

Not very often and that’s a fact. Here are my predictions for the first round of the 2014 National Hockey League Playoffs.

1 Boston vs 4 Detroit – The Wings took three of four from the Bruins this season and I don’t believe that’s just a fluke. Sometimes teams just match-up better with others. Look for Detroit to take the Bruins the distance but Boston wins in seven.

2 Tampa Bay vs 3 Montreal – The Lightning are 3-1 against the Habs this season but all four games were close.  TB faces the 4th best penalty kill in the league and that’s the hurdle they need to get over. Take the Lightning in six.

1 Pittsburgh vs 4 Columbus – The Penguins won all five meetings with Columbus this season and may have as many fans in Ohio as they will at home. The league’s top power play should wrap this up in five games.

2 NY Rangers vs 3 Philadelphia Flyers – These two split their season series at two games apiece. The Rangers feature top five squads in both the power play and penalty kill. The Flyers aren’t too bad in either of those departments either though ranking seventh in both. I like the Rangers in seven.

1 Anaheim vs 4 Dallas – Despite having a low-ranking power play (22nd) the Ducks still led the NHL in scoring. Their penalty kill is middle of the road which shouldn’t hurt them against a Stars’ team that ranks 23rd on the power play. Take the Ducks in five.

2 San Jose vs 3 LA Kings – The Sharks lost three of five this year against the Kings in games that were each a little different in terms of scoring affairs vs defensive battles. LA ranks number one in the NHL in goals against with just 2 goals per game. Defense wins in the NHL Playoffs and that’s why I like them in six games.

1 Colorado vs 4 Minnesota – The Avs were 4-1 against the Wild this season and averaged four goals per game in those contests. This series will be decided by the special teams’ units because Colorado is fifth in the NHL on the power play while the Wild are 27th in penalty killing. Take the Avs in five.

2 St. Louis vs 3 Chicago – The Blues rank in the top eight in goals against (3rd), goals per game (6th), PP (8th) and PK (2nd). The Blackhawks have beaten the Blues in their last two meetings after losing three straight against them earlier in the season. Chicago has no problem scoring and I think that’s why they take the slumping Blues to seven games and pull the upset.