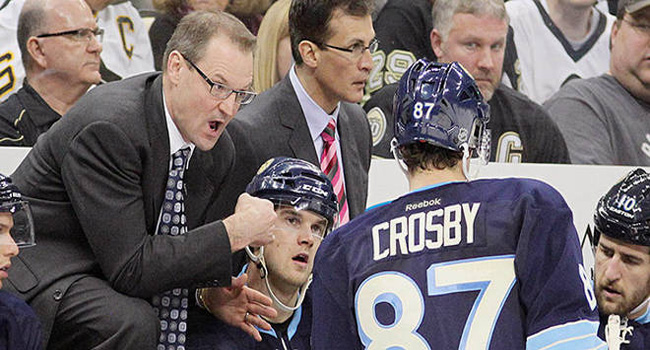 There are always questions heading into any playoff series whether they be in the National Basketball Association or the National Hockey League. These questions usually revolve around four-five or three-six match-ups where the teams are more similar in terms of records.

What we’ve discovered already however is that series in both leagues have already taken unexpected turns despite the fact the series are still in the early stages.

In the NHL, the second-seeded Pittsburgh Penguins needed a comeback to defeat Columbus in game one and then blew a two-goal lead in game two before eventually losing in overtime. The Pens, who were the best power play team in the NHL this season, struggled in that department going one for eight.

They also gave up a shorthanded goal for the second straight game. Star Sidney Crosby had two assists Saturday night but has yet to score a goal as the series shifts to Columbus. Head Coach Dan Bylsma needs a very deep playoff run in order to keep his job and right now that isn’t looking real good.

In St. Louis, the Blues took a 2-0 lead over defending champion Chicago by winning yet another overtime thriller. Game one saw the two rivals go three overtime periods before the Blues won. While the Blues entered as the higher seed, they didn’t exactly come in playing well.

St. Louis stumbled and bumbled their way to the end of the season and left many wondering if they’d be able to do much in the playoffs. So far so good for them but now the Blackhawks are facing the proposition of having to win four of the next five games if they hope to defend their Stanley Cup Title.

In the NBA, the top seed in the Eastern Conference has already given up the home court advantage it worked all season to get. The Indiana Pacers looked pretty bad at both ends of the court Saturday dropping game one to the eighth seeded Atlanta Hawks 101-93.

Sometimes teams need to get to the playoffs because boredom starts to set in late in the regular season but the problems for the Pacers go beyond being bored. This team has been incredibly out of sync for some time now and we can only wonder just how bad it must be behind the closed doors of the locker room.

I believe the Pacers have enough firepower to get through this series but the defensive end is where they’ve made their living and right now I don’t know if they can pull it together.

Also in the NBA, both Toronto and the Los Angeles Clippers squandered home court advantage by losing their series’ opening games. In Canada, the Raptors lost to Brooklyn in a bizarre game that featured a ‘human’ shot clock. After the shot clocks at each end malfunctioned, the PA announcer was forced to shout the shot clock at intervals before saying ‘horn’ when it expired.

The Raptors will need to get themselves fixed if they plan to head into Brooklyn tied at one. Their playoff inexperience showed down the stretch and they must do a better job at both ends of the court and in time management.

In LA, most expected the Clippers’ series with Golden State to be chippy and hard fought but most expect the Clips to prevail. If they are to do so, they need to get it turned around quickly following an opening game loss to the Warriors.

For starters, the Clippers need Blake Griffin to foul less. Granted, there were some questionable calls, but Griffin can’t afford to be on the bench having fouled out late in the game. It’s just one game but they need a quick turnaround to even this series.