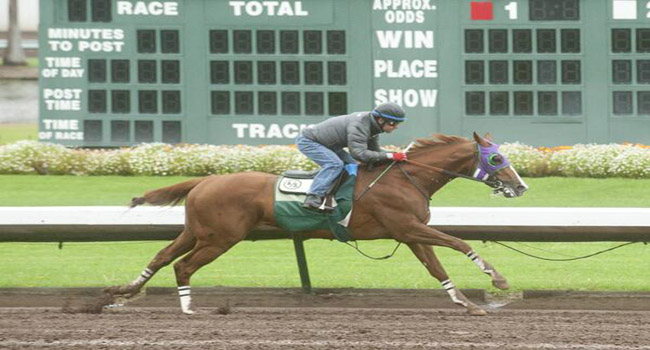 The 139th running of the Preakness Stakes takes place tomorrow in Maryland and with just 10 horses in the event, the possibility for a Triple Crown winner increases ever so slightly. California Chrome, the Kentucky Derby winner from two weeks ago, has opened as a 3-5 favorite making the thoroughbred a very popular pick to win tomorrow.

2. General A Rod, 15-1 – Jockey Javier Castellano; enters with a record of 2-2-1 in six races and comes off his worst finish of the six which was 11th at the Kentucky Derby.

3. California Chrome, 3-5 – Jockey Victor Espinoza; enters with a record of 7-1-0 in 11 races. The Kentucky Derby winner has now won five straight races and six of his last eight. Also the first California-bred horse to win the Derby.

4. Ring Weekend, 20-1 – Jockey Alan Garcia; enters race 2-2-2 in his last seven. Had planned to run at the Derby but spiked a fever a week prior and didn’t run. Has two wins and places in last four races.

6. Ria Antonia, 30-1 – Jockey Calvin Borel; enters race at 2-1-0 in eight races. Borel has one career Preakness victory which came in 2009. Last race for the filly was a 6th place in the Kentucky Oaks. She is the 54th filly to run the Preakness and only five have won before with the most recent being Rachel Alexandra in 2009.

7. Kid Cruz, 20-1 – Jockey Julian Pimentel; enters race at 3-1-0 in five races. Named for New York Giants’ receiver Victor Cruz. Horse has won three of his last four races including his most recent at Pimlico. This is just Pimentel’s second mount at the Preakness.

8. Social Inclusion, 5-1 – Jockey Luis Contreras; enters race at 2-0-1 in three races. Although experience is small, horse is very talented. Contreras has no victories in Triple Crown races. 85-year-old trainer Manny Azpura has won over 3,000 races but this is first time at the Preakness.

9. Pablo Del Monte, 20-1 – Jockey Jeffrey Sanchez; enters race at 2-0-2 in six races. This is Sanchez’s first ride in the Preakness. Has not won since October of last year.

My Prediction: The added length is always a concern for trainers as the Triple Crown scene shifts east to Pimlico from Louisville. It’s extremely hard to look past California Chrome here. He is on a tremendous streak and was relatively unchallenged at the Kentucky Derby. At 5/1, Social Inclusion is a really interesting horse.

An 85-year old trainer from Venezuela  winning his first Triple Crown race would make for some great theater, but how will the horse react to such massive stage? It’s also hard not to like Bayern. Bob Baffert’s experience with this race is essentially unrivaled. Take California Chrome to win the second leg with Bayern taking second and Ride On Curlin to finish third.