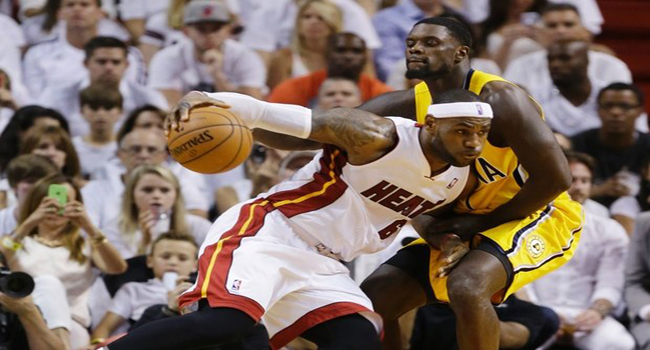 At the time of this writing, game four of the Eastern Conference Finals is not yet completed. I make this declaration only because I don’t yet know the ramifications of Lance Stephenson’s comments about LeBron James’ trash-talking.

This past weekend, Stephenson said that James’ trash-talking was a sign of weakness. James is not known to be one of the more prolific smack talkers in the National Basketball Association but he can hold his own when necessary. Stephenson was also the same guy who wanted to run Dwyane Wade so hard that his knees would ‘flare up.’

If Stephenson can back up his thoughts at both ends of the court then I have no problem with his comments. If he can’t, then he should probably shut up.

The first of what we all know is going to be many of these types of stories has happened; Johnny Manziel has been spotted partying in Las Vegas. Let the negative comments fly!!

What we all need to understand is that this is typical of most wealthy 21-year old men. It’s even more so when they are famous quarterbacks who are invited to Vegas by UFC boss Dana White. Many have already been screaming that Manziel should know better! Why isn’t is nose in his playbook? Why isn’t he keeping a lower profile? Has he learned nothing???

For the record, Manziel was there and so was Patriots’ tight end Rob Gronkowski. The two were photographed together with a dozen or so bikini-clad young ladies. What we also need to know is that National Football League players are frequent guests of Las Vegas so this idea that Manziel was a rare sight as a professional football player in Vegas is not news.

Sadly, this is the type of coverage Manziel is going to get until he proves himself to be a complete failure as an NFL quarterback. When, and if,  that happens, no one will care what Manziel does.

Redskins’ Name Change is Coming Sooner Rather Than Later

Last week, 50 United States Senators signed a letter asking Daniel Snyder, owner of the Washington Redskins, to change the team’s nickname. Of the 50 senators, 48 were Democrats and two were independents. If you didn’t think this was a political football before then you would have to be blind not to see it now.

There are really two questions at play here; Is this all about political correctness or is there suddenly overwhelming support in the Native American community to change the name because it is derogatory?

Most polls continue to show that less than half of Native Americans surveyed find the nickname ‘Redskins’ to be offensive. Frankly, that should end the discussion right there shouldn’t it? Of course not because there are pressures from many groups around the country who have absolutely no dog in this fight other than because they want to be heard.

I’ve seen the toll this debate takes at local levels where high schools nearby were forced to change from their Native American mascots to more generic ones. These communities became divided and ultimately lost a good deal of their identity. Sounds silly doesn’t it? Well, it isn’t and I guarantee you this is one of the concerns of Dan Snyder.

Oh I’d be willing to bet that Snyder has also thought of the money that will be brought in when the name does change and the uniforms and logos are redesigned but at what overall cost to his franchise?

The political winds are blowing more steadily now and the pressure is mounting. I give it another six months to a year before Snyder is finally forced to cave by the League.