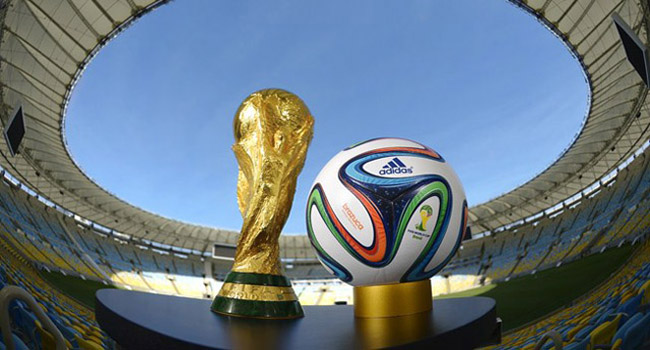 I won’t be commenting a whole lot on the 2014 World Cup. I’ll probably give you some lines on games and some minor thoughts on each one but I’m just not a soccer guy.

Most of you recognize that I’m not a ‘soccer’ guy simply because I called it ‘soccer.’ Any true fan of the game I imagine calls it ‘futbol.’ In my world, football has always been about an oblong, brown object used primarily here in the United States.

When I was growing up, playing soccer was not ‘cool.’ Kids that were cut or quit the football team played soccer. It was always seen as a game for those not tough enough to play real football and I admit I thought that way for a long time.

Through age, experience and maturity, I’ve learned to accept that soccer can be a grueling sport where tremendous skill and stamina is necessary.

With that being said, it doesn’t mean that I’ve wrapped myself in the red, white and blue and will be cheering on the Men’s National Team in the World Cup. There may have been a time when I might have and I really do wish the team well, but I’m not planning my day around their games.

Frankly, I’ve grown tired of getting beat over the head with soccer. I do not need to know via ESPN’s BottomLine that the Euro League Championship is today. I don’t need soccer to be constantly pushed down my throat as the answer to the ‘brutality of American football.’ Soccer bores me but I’ve been told “you just don’t understand it.” I can’t argue that.

Do you ever find it a bit surprising that soccer’s rise in America has coincided with concussion lawsuits and a total elimination of violence in the National Football League? This isn’t a coincidence people.

I do recognize the popularity of the World Cup and the immense popularity of the game world-wide but I’m just not ever going to buy into the game and I won’t apologize for that. It continues to grow across the country and for numerous reasons. Parents like it for small kids because it’s relatively harmless and it’s inexpensive. This is very much the same reason it has such popularity globally. All you need is a ball and two objects with which to create a goal.

While I thoroughly enjoy a good defensive game of football, watching a soccer game that has no scoring does absolutely nothing for me and I realize this makes me a curmudgeon but I am what I am.

This past Tuesday I believe it was, the US Team played a “friendly” against Azerbaijan out in Candlestick Park. For as much popularity the game is supposedly getting, the stadium was barely a quarter filled. The fact is that most stadium sports are struggling because of high ticket prices and poor behavior by fans, but this persistent claim that soccer is growing by leaps and bounds has flaws. The nearly empty stadium was proof of that.

I’m just not a soccer guy but that doesn’t mean you can’t continue to do your chants wave your colors. The World Cup is almost here and I’ll gladly step aside so you can enjoy it.