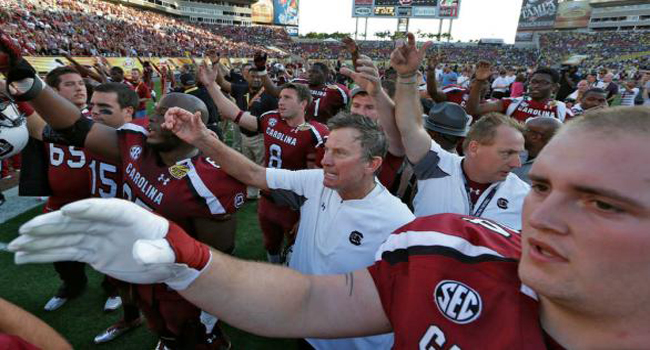 With the Big Ten completed, my attention turns to the Southeastern Conference. I expect things to fall back a bit with so many new quarterbacks but it will still be the same old SEC when it’s all over. Today, it’s the East.

Florida 3/1 – Will Muschamp and the Gators lost seven straight games to finish the season in 2013. They return seven starters on both sides of the ball which is cause for optimism and Jeff Driskel returns at QB after a season-ending injury last year. Florida should be 3-0 heading to Tuscaloosa to play Alabama. Other road trips include Vandy, Tennessee and Florida State.

Georgia 8/5 – The Bulldogs will ride Todd Gurley and a defense that returns eight starters. With Florida down and South Carolina the only real threat, there will be tons of pressure on Mark Richt to get back to the SEC Title Game. Georgia has just four away games and the neutral site showdown with the Gators. Possible road bumps include Missouri and South Carolina. They do get Clemson, Auburn and Georgia Tech at home.

Kentucky 50/1 – The Wildcats are hoping a big-time recruiting class can get them to a bowl game in 2014. In Mark Stoops’ first season they were just 2-10. The road slate isn’t very kind to Big Blue. They have trips to Florida, Tennessee, Missouri, LSU and Louisville. They do get home dates with South Carolina and Georgia but I have a hard time seeing six wins here.

Missouri 10/1 – The defending division champions have several holes to fill as they only have four starters returning on each side of the ball. Now that they’ve been in the SEC two seasons, they are no longer going to sneak up on anyone. The Tigers first road game is at Toledo who gave them all they could handle before pulling away last season. They’ll also have to go to Tennessee, Texas A&M, Florida and South Carolina. With a lot of new faces, the Tigers cold take a step back this season.

South Carolina 7/4 – The Gamecocks lost just twice last season and were the only team to defeat division chap Missouri who they get in Columbia this season. SC gets eight starters back on offense and six on defense. The road schedule could be too daunting down the stretch as the Gamecocks have to play at Auburn, Florida and the finale at Clemson. Steve Spurrier always fields competitive teams and this will be no different. It’s very possible SC could 7-0 before they head to Auburn.

Tennessee 12/1 – Butch Jones has this team on the rise and that was evident last year. They were competitive in several games but still struggled with the big boys like Alabama, Auburn and Oregon. The Vols will have to fill some holes on both sides of the ball but the expectations are still going to be higher this year. There won’t be much room for error but six wins is very possible. Key road trips are at Oklahoma, Georgia and South Carolina while they get Florida and Alabama at Neyland Stadium.

Vanderbilt 50/1 – James Franklin has left for Penn State so Derek Mason takes over. With six starters back on offense and just four on defense, Mason’s job is cut out for him. The Commodores draw Ole Miss and Mississippi State from the West and those could be wins. The also have home dates with Florida, South Carolina and Tennessee. The two tough road games are at Missouri and at Georgia. Don’t be surprised to see this team back in a bowl under Mason.

The Pick: I just don’t have faith in Muschamp despite a lot of talent. Look for the Gamecocks to take the title.