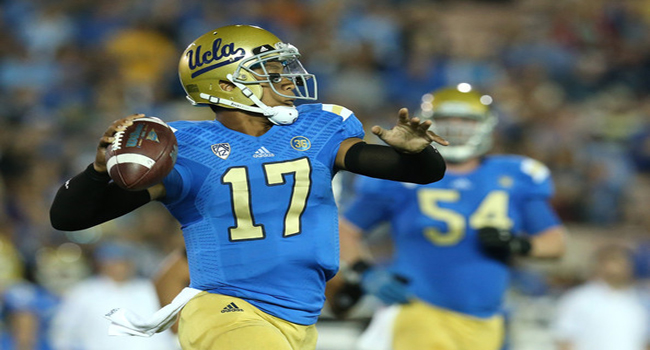 On Wednesday I gave you the Pac-12 North odds and who I liked to win it. Today, I’m presenting the Pac-12 South which I believe is a four-horse race.

UCLA 5/4 – Jim Mora, Jr. enters his third year in Los Angeles and brings with him high expectations coming off a very nice 10-3 record. Nine starters return on offense while the defense returns eight. Dual-threat quarterback Brett Hundley returns to lead the offense as does Freshman of the Year Myles Jack who plays on both sides of the ball. The only scary road trips are against Texas in Arlington and at Arizona State. The Bruins get USC and Stanford at home to finish the season. Another 10-win season is very possible.

USC 7/4 – It’s year of Steve Sarkisian and expectations are high. Cody Kessler is one of seven starters who return on offense and he has already been named the starter at QB. Seven starters also return on defense which bodes well for a team facing a tough start to the season. The Trojans get always tough Fresno State at home before traveling to Stanford and then across the country to Boston College. Trips to Arizona and UCLA also await. SC does get Notre Dame, Arizona State and Oregon State at home. I think eight wins is the number but some will expect higher.

Arizona State 3 /1 – Todd Graham has a very nice 18-9 record in two years at ASU but the real test begins as the Sun Devils return just two starters on defense and only six on the offensive side of the ball. I like the job he has done since leaving Pitt in the middle of the night, but the chances of repeating as South Division champs are going to be very difficult. The schedule is brutal in my opinion with trips to USC, Washington, Oregon State and Arizona. The home schedule isn’t much better with Notre Dame, UCLA and Stanford coming to Tempe. A step back is highly possible in 2014 but there is a lot of talent on the roster too.

Arizona 10/1 – Rich Rodriguez enters year three in the desert and comes off an 8-5 record and a bowl victory. Last year’s Wildcats surprised a few teams like Oregon and USC but lost to a few schools they probably shouldn’t have. Seven starters return on offense and six on the defense which was beaten up in conference play. The schedule features only two road games of note; at Oregon and at UCLA. The other three should provide wins. At home, the Wildcats get USC, Washington and Arizona State. I expect another eight win season in Tucson.

Utah 33/1 – Kyle Whittingham has a really strong 75-39 overall record entering his tenth season in the Beehive State. Six starters return on both sides of the ball as the Utes look to make a splash in the Pac-12 South. Utah faces a tough road schedule with trips to Michigan, UCLA, Oregon State, Arizona State and Stanford. I think the goal here for Whittingham and company is to get back to .500 and a bowl game but that road schedule worries me.

Colorado 50/1 – In year one, Mike McIntyre went just 4-8 but he gets eight starters back on both sides of the ball. The Buffaloes’ defense surrendered over 40 points in seven of their eight losses and three times gave up over 50. Colorado has just four road games and the neutral site rivalry game against Colorado State in Denver. Three of those four are brutal though as they travel to Oregon, Arizona and USC. I think six wins is the goal here and I think it’s very workable as well.

The Pick: Toss out Colorado and Utah right now as they just don’t have the horses. The wild-cards are the schools in the desert and the favorites are the schools from LA. I like the Bruins to take the Pac-12 South in 2014.