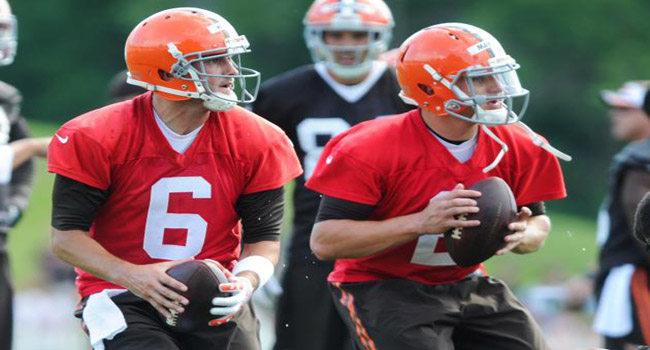 It’s hard enough to believe that the National Football League season is upon us let alone the fact we are already deep into the preseason. There is already no shortage of story-lines throughout the NFL and they sound like a a good place to start for a Saturday.

The ‘Decision’ is over in Cleveland. For now…

Browns’ Head Coach Mike Pettine announced earlier this week that Brian Hoyer had won the quarterback job over Johnny Manziel despite the fact that both guys were pretty awful last Monday night in Washington. Browns’ beat writer Mary Kay Cabot was pretty straight-forward when she said Manziel’s partying and middle-finger gesture were the reason he lost the job.

I’ve said from day one that I thought that Manziel would be the starter in the opening week and while it looks like I’m wrong, if Hoyer stumbles at all I believe you’ll see Manziel in there. The Browns can’t afford to have their biggest draw standing on the sidelines holding a clipboard all season and Mike Pettine knows that as well as anyone. Short of a 3-0 start by Hoyer, I think Manziel sees the field in week five after their bye.

Washington Redskins’ quarterback Robert Griffin III felt it necessary to tweet out this week that he was essentially going to prove all the doubters wrong in 2014. I guess I have to wonder why RGIII felt the need to do this? Was this some form of self-help? Whatever it was, I have to question why he went public?

Many are questioning two things regarding the former Heisman Trophy winner; first, can he stay healthy? Second, can he adjust to a more pro-style offense? Both are fair questions but I’m concerned why he needed to pump himself up in such a public way. To say that I have my doubts about his overall mental well-being headed into the season would be an understatement. Keep your thoughts to your self RGIII. They can’t haunt you publicly that way.

Dumb and Dumber in Pittsburgh

The last thing the Pittsburgh Steelers needed was a distraction as they try to rebound from back-to-back 8-8 seasons but that’s exactly what they got when running backs Le’Veon Bell and LeGarrette Blount were charged with marijuana possession. Bell has also been charged with driving under the influence which apparently Bell didn’t know he could be charged.

The two players were just 90 minutes from boarding a team flight to Philadelphia for their preseason game against the Eagles on Thursday night. The Steelers were beaten 31-21 but the score doesn’t indicate how badly the Eagles beat them leading to speculation that the team was distracted by the incident.

Rather than suspend them for the game, Head Coach Mike Tomlin chose to play the two pot heads and I like the move. Both played well into the second half and Bell’s karma got the best of him as he was decked a couple of times on big hits by Eagles’ defenders.

The real issue here is not the legalization of marijuana or whether the NFL needs to relax penalties for it, but rather, it’s the sheer stupidity of the two “professionals.” They were in  a vehicle, at a stop light with smoke coming from the car and a police officer pulled up next to them. Jim Carrey and Jeff Daniels aren’t dumb enough to pull this off.

Blount and Bell are far fro the only players in the NFL who use marijuana but at least others are smart enough to not do it in public.