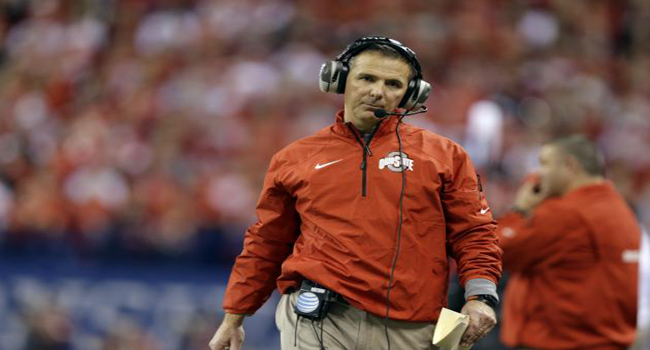 There are any number of adjectives I could use to describe my predictions for college football 2014 but ‘fearless’ just seems right. After all, they are fearless. I mean, it isn’t like I should ‘fear’ any repercussions should my predictions prove untrue right?

Enough lip service. Here are some predictions sure to come true for college football this year.

1. Ohio State still wins 10 games despite the loss of Braxton Miller. Have you seen the Buckeyes’ schedule? The two biggest road games are at Navy in the opener and at Michigan State in what most expect will be for the Big Ten East Division title. While the loss of Braxton to season-ending shoulder surgery is a tough pill to swallow, it’s not like Urban Meyer suddenly forget how to recruit and how to coach. Even with a redshirt freshman quarterback I expect Ohio State to still win ten games.

2. Oklahoma doesn’t make the Final Four. Everyone is jumping on the Sooners’ bandwagon and it all has to do with Trevor Knight’s performance against Alabama in the Sugar Bowl. Let’s think about this for a second; Alabama was playing a meaningless game after their difficult and heart-breaking loss to Auburn. They went from the number one team in the land and potential SEC Champ to a Sugar Bowl bid. Oklahoma Tech could have beaten Alabama in the Sugar Bowl last year based on this theory. Knight is a nice QB but I expect some less than good games along the way. Don’t be surprised to see the Sooners lose one or two they probably shouldn’t. One loss is enough to cost them a Final Four bid.

3. Florida State drops an unexpected game. By all accounts, the Seminoles could be better than they were last year but that doesn’t mean they are infallible. If you had to point to a game where the opponent could give them trouble, you’d say Oklahoma State, Clemson, Miami and Florida. I have a feeling they are going to stunned by an unexpected foe however. Don’t rule out a road loss to NC State or Louisville. Both environments will be rocking.

4. Michigan’s Brady Hoke will lose to both Michigan State and Ohio State. Again. I like Brady Hoke and I think  a lot of the Michigan faithful does as well but I think there’s one major problem with him and that’s that I don’t know how good of a coach he really is. Look at the losses in his time in Ann Arbor and you’ll notice multiple losses to Urban Meyer, Kirk Ferentz, Bo Pelini and Mark Dantonio. There’s no shame in losing multiple games to those coaches but at some point you have to start questioning whether he can get it done with his great recruiting classes. This year won’t be any better as the Wolverines have to go to both Columbus and East Lansing.

5. South Carolina wins the SEC. Yup. That’s what I said. South Carolina wins the SEC. The first clue was the fact that Head Coach Steve Spurrier has been flapping his trademark gums more than usual of late. Dating back to his days coaching the Florida Gators, that’s a sure sign that he likes his team. Secondly, the Gamecocks avoid both LSU and Alabama on the schedule. Their only two tough road games are at Auburn and at Florida. Normally I’d add Clemson to that list but Spurrier has owned the in-state Tigers. I like USC to win the SEC Title game over Alabama.