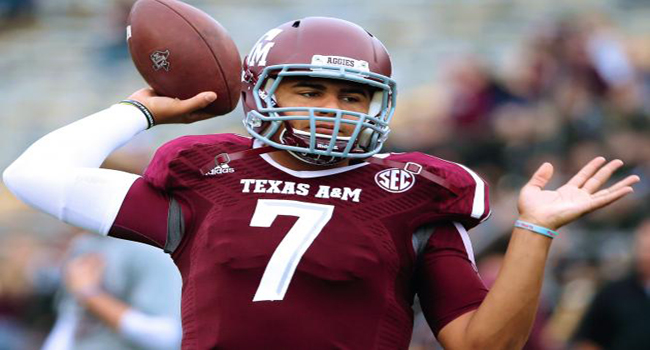 So apparently my English skills are about as good as my ability to predict things if read this title. Two days ago, I gave you five fearless predictions for college football and already one of them is looking incredibly wrong. I said that Steve Spurrier and his South Carolina Gamecocks would win the SEC and while that could still happen, that theory took a massive hit last night.

Texas A&M came to Columbia with a redshirt freshman quarterback not named Johnny Manziel and torched the Gamecocks for over 500 yards passing in a 52-28 upset. Kenny Hill, son of former MLB pitcher Ken Hill, threw for 511 yards and three touchdowns in the rout over ninth-ranked South Carolina. The win does two things; first it makes us question just how good South Carolina is and two, how much longer before Kevin Sumlin is coaching in the NFL.

The fact that Sumlin has been able to show in just one game that he has moved this team beyond the Manziel era is enough for NFL teams and other major college programs to take notice. As for the Gamecocks, might want to work on that pass defense.

Goodell Does Something Positive for Once

Roger Goodell and the NFL announced yesterday that they have implemented a disciplinary system for domestic violence abusers. The first time will result in a six-game suspension while the second offense will result in a lifetime ban from the sport. Why it took this long for some form action in this regard is beyond me but it’s finally here and we should be happy about it as we can’t tolerate this behavior.

In the announcement, Goodell did something I never dreamed I’d hear from him. He apologized for the weak response in Ray Rice’s situation. While I appreciate the apology, I find it interesting that he didn’t extend Rice’s penalty. Perhaps it has to do with the NFLPA or maybe that Baltimore is his hometown team.

Strange that Goodell never apologized to Ben Roethlisberger after suspending him even though he was never arrested or charged with a crime. I digress however… I’m glad that the NFL is acting on domestic violence. It’s just a shame it’s taken this long and after a massive cry from the general public. Goodell has once again proven himself as the ‘reactive’ commissioner.

Because they have made themselves the epicenter of the sports’ world, ESPN is hard to avoid no matter how much they irritate and bother the hell out of us. Outside of ’30 for 30′ and the featuring of the several major sports, the rest of ESPN is essentially tabloid fodder. This notion was proved once again this week as ESPN reporter Josina Anderson decided to report on St. Louis Rams’ defensive end Michael Sam’s showering habits.

As you know, Sam is an openly gay man trying to make the roster and so far, he has an excellent shot at it. Whoever thought a story about whether Michael Sam showers with his teammates was worthy of our viewing time at ESPN needs to be fired. My question in this manner is quite simple; “who cares?”

Sam has had a really good preseason for the Rams and his two sacks of Cleveland Browns’ QB Johnny Manziel nearly forced Twitter into a shutdown. Whether he makes the roster or not is uncertain but someone will grab him because he has proven he can play in the NFL. Let’s hope that is what ESPN chooses to report on from here on out.