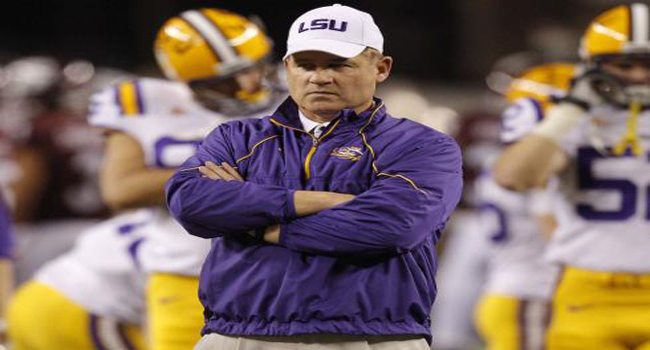 If this is what we are going to get every Saturday through January of 2015 then I think we’ll all be quite pleased. While there will be weekends with more upsets and perhaps more exciting action, this opening Saturday proved one important thing; I don’t think there is one dominant team out there at the moment. Let’s start with the two big games in Texas.

LSU rallied to beat Wisconsin last night in Houston by scoring 21 unanswered points to win 28-24. The Badgers have to be violently ill this morning after having a powerhouse SEC team on the ropes only to get knocked out in the end. Badgers’ QB Melvin Gordon carried his team with 140 yards rushing and a touchdown but new QB Tanner McEvoy could do nothing in the passing game. He went just 8 for 24 for 50 yards and two picks.

The Tigers meanwhile looked uninterested, fundamentally unsound and lazy while falling behind Wisconsin early and into the second half. Les Miles as expected started Anthony Jennings who was miserable at QB. Brandon Davis came in for a series and didn’t look much better. Jennings was able to find a groove in the second half though throwing two touchdown passes to rally the Tigers to victory.

Wisconsin will have to figure out the QB situation because those numbers by McEvoy won’t get it done. LSU meanwhile has tons of work to do but can build on the comeback win.

Up the road in Arlington, defending national champion Florida State survived 37-31 against a very tough and game Oklahoma State team. The Seminoles were thought to be as good on defense as they are on offense but giving up 364 yards and 8 of 16 on third downs is not going to get this team a return trip to Cowboys Stadium for the title game.

Reigning Heisman Trophy winner Jameis Winston was great when he needed to be despite two turnovers. He threw for 370 yards, a touchdown and a fantastic 28-yard TD run. The big concern going forward for FSU is the running game which put up just 106 yards. The Seminoles’ offensive line is considered the best in the country but they looked anything but against a younger, more inexperienced defensive front from Oklahoma State.

Sometimes it’s games like these that give you a shot in the arm or are a real wake up call. If I’m Florida State this morning I’m hoping that this is exactly the case.

Other games of note…

UCLA needed three defensive touchdowns to win on the road against Virginia 28-20. If Brett Hundley expects to be a Heisman candidate then he has to play better than he did… Ohio State defeated Navy 34-17 to begin the ‘season without Braxton Miller’ campaign. The Midshipmen actually led 14-13 in the third quarter… There was no gigantic upset in the Big House this time as Michigan rolled to a 52-14 win over Appalachian State. This was a much less talented Mountaineer team than was the 2007 team however… Second ranked Alabama survived a tough contest with West Virginia winning 33-22 in Atlanta. The Tide rolled to over 500 yards of offense with running backs Derrick Henry and T.J. Yeldon both going over 100 yards on the day. The alarming part for Bama is that WVU QB Clint Trickett threw for 365 yards which is the most ever against a Saban-coached Bama team. He broke the record set in the Tide’s last game which was a Sugar Bowl loss to Oklahoma… The clear front-runner in the Heisman race has to be Georgia’s Todd Gurley who rushed for 198 yards and three TDs in the Bulldogs’ 45-21 rout of Clemson. He also had a 100-yard kickoff return for touchdown too.