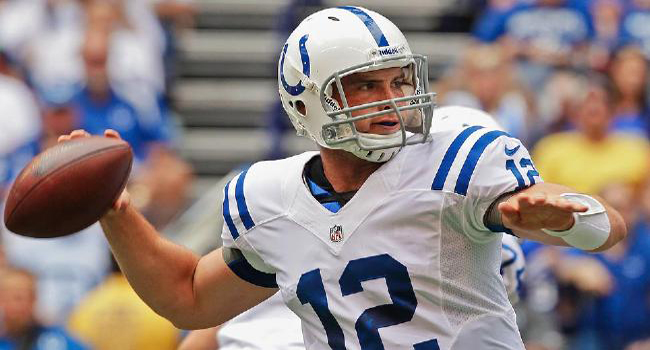 Indianapolis (-3.5) at Houston (O/U 46) – These two AFC South rivals meet for the first time in 2014 and with both tied at 3-2 atop the division, the game takes on even greater significance. They won’t meet again until the Texans visit Indianapolis in mid-December.

Even though this is just week six, the game is significant because division foes Jacksonville and Tennessee are a combined 1-9 which means that both teams will stand really good chances of making the playoffs as division champs and a wild-card. The assumes they both hod serve against both the Jags and Titans.

Through the first five Thursday night games, the average margin of victory is over 20 points and only once was one of those winners a road team (Giants two weeks ago over Washington). This stat obviously bodes well for the Texans but I really think the string of blowout games on Thursday nights comes to an end tomorrow night.

The Texans will do their best to stop the run and force Andrew Luck into poor decisions with pressure up the middle from J.J. Watt and company. The Colts will follow a similar gameplan because I have to believe they don’t think Ryan Fitzpatrick can beat them without a solid running attack.

Indianapolis was pretty impressive in defeating Baltimore last weekend as the Colts defense held the Ravens to just 13 points. The Texans have to be kicking themselves for letting one slip away against in-state rival Dallas in overtime.

The Pick: I like Indy to cover and the OVER but I expect a close game.

BYU at Central Florida (-3.5) – The Cougars will come to Orlando with the memories or what might have been in their minds. While they dropped a 35-20 game to Utah State, the bigger concern was the loss of do-everything quarterback Taysom Hill. Head Coach Bronco Mendenhall said this week that Hill’s broken leg, suffered late in the first half, is much worse then originally thought.

His surgery required a plate and eight screws and he had severe ligament damage as well. Back-up Christian Stewart will get the start after a less-then solid relief role against the Aggies. Stewart completed just 10 of 29 passes and had three interceptions.

The Knights aren’t exactly going to feel sorry for Hill and the Cougars. They are coming of a very nice conference win at Houston last week to get to 2-2 on the season. UCF’s two losses are to Penn State on a last-second field goal and to Missouri who beat them up pretty good.

Nothing tests a team and head coach like a injury to the quarterback especially one who is so well-thought of by his teammates. Can the Cougars rebound?

Trends: BYU is 2-7-1 against the spread in their last ten games… The total has gone UNDER in four of UCF’s last five games at home.

The Pick: UCF’s offense concerns me and that’s why I’m taking BYU getting the points and I like the UNDER.