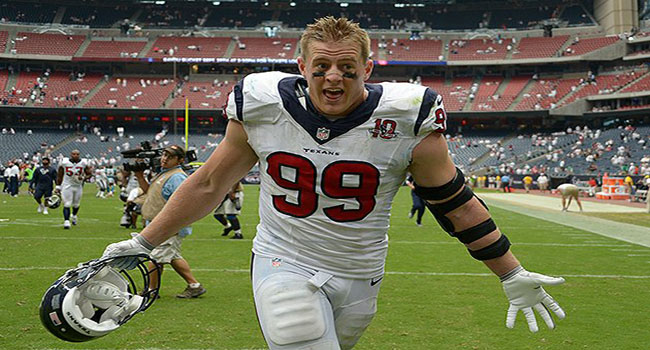 I wasn’t one bit surprised to hear some fans of the National Football League actually complaining about how much attention Houston Texans’ defensive lineman J.J. Watt has been getting. Fans by nature get tired of feel-good stories long before they tire of dramatic or controversy-filled ones.

I guess this is just how we are wired because it isn’t any different in the larger society is it? For every piece of good news there are the Ray Rice’s and Kim Kardashian’s of the world who demand our attention.

My message to those who are tired of hearing about and seeing J.J. Watt on all kinds of commercials is this; Shut up!

But you’re tired of hearing about him and seeing him on television all the time huh?

You obviously want more coverage of Ray Rice knocking his wife out cold in an elevator. Perhaps you need to hear more about Adrian Peterson telling a court official that he got high just before his first court appearance for abusing his child with a tree branch.

Right now, Watt could probably miss the remainder of the season and still win defensive player of the year honors. Furthermore, if he continues on his torrid pace, there’s a good chance that he could be deemed the most valuable player in the entire NFL.

Only two other defensive players have ever won the award and they would be Lawrence Taylor and Alan Page. There will certainly be calls for quarterbacks like Peyton Manning and Philip Rivers to win the award and both are having good seasons, but what Watt is doing right now is as dominant as anything anyone in the NFL is doing.

The other reason you shouldn’t be tired of Watt is that he’s a quality individual. He’s active in the Houston community and rarely turns down an opportunity to do things with or for kids. He’s not afraid to make fun of himself either as he does in commercials for any number of advertisers recently.

This is a time where we as fans should be embracing a guy like Watt rather than “tiring of him.” We should be making more out of guys who take time out of their Tuesday off-days to spend time doing charitable works but we don’t. We’d rather hear salacious stories of what guys are doing wrong.

I’m not a Texans’ fan in any way, shape or form but I’m a J.J. Watt fan and you should be too.

Sparano Buries the Past

In case you missed it this past week, new Oakland Raiders’ Head Coach Tony Sparano’s first act as the new leader was to gather the team at the far end of the practice for a meeting. Upon their arrival, the team found a small hole dug and a shovel.

Sparano took the shovel and announced that he was burying the first four games of the season. He then invited each and every member of the team to drop some dirt in the hole.

I’ve seen and heard of this type of thing before and frankly if I were Sparano I’d be looking for some way to change the culture too. While burying a ball isn’t going to make players better it at least sends the message that things are changing if even a little.