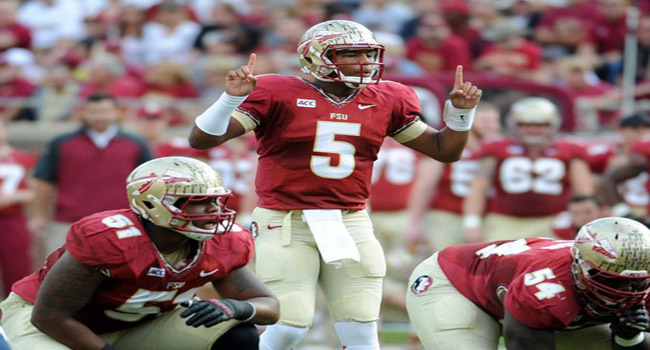 Off the field, the last seven days have been pretty bad for the reigning Heisman Trophy Winner Jameis Winston. His school, Florida State University, has opened an investigation into his sexual assault allegations. According to Title IX rules, FSU is within its’ rights to investigate the alleged assault on their own. Winston has also been linked to the same sports’ memorabilia people that have cost Georgia running back Todd Gurley his season.

On the field, Winston was brilliant in leading the Seminoles over Syracuse in Western New York on Saturday. He was 30 for 36 for 318 yards and three touchdowns and is proving once again that he seems to play better the more the off-field scrutiny he is under.

Signing autographs for anyone is not against the law nor is it against the rules of the NCAA. Accepting so much as a dime however is a violation of NCAA rules and to this point Winston claims he never accepted any money. ESPN’s Darren Revell said the signatures on 500 pieces of memorabilia were in the same location on each piece and were signed with the same marker.

While that doesn’t mean Winston did anything wrong, it suggests that he did these signings at one time which under almost all circumstances results in a payment.

I don’t have the answers here and I’m not going to claim to but I’ve been around long enough to know that where there is smoke, there is almost always fire. Going back to the FSU investigation for a minute, while this will not result in any jail time or legal ramification, it could be a tremendous thorn in Winston’s side from here on out in his personal and professional life.

He has the right to remain 100% silent while being questioned by FSU authorities but what has already been uncovered is disturbing. Florida State officials have admitted what many of us assumed about the Tallahassee Police Department’s investigation. It was poorly done and was essentially swept under the rug to make things easier for Winston and the football program.

Regardless of how this investigation turns out, the real issue here is the eventual death of amateurism.

My personal opinion is that a player should be allowed to make money any way possible (within the law obviously). Take Gurley for example who is currently suspended for signing jerseys for money. Why can’t he make money for this when the University of Georgia is making money hand over fist by selling his jersey on their own website?

Move away from football for second… There was a time in amateur athletics when athletes basically lived on whatever they had. Corporate sponsorship was not allowed at the time so many Olympic hopefuls had to rely on their families for financial support.

Now, look at a guy like Michael Phelps who apparently got bored being an average citizen and was arrest two weeks ago for his second DUI. Phelps has made millions off of sponsorships like the ones he’s had with Subway, Under Armor and several swimming apparel companies. The mere fact we call Olympians ‘amateurs’ anymore is a joke.

While I firmly believe Winston has screwed up royally and much of it due to feelings of entitlement, the system still needs to be overhauled. College athletes need to be allowed to take advantage of their fame especially considering the money they bring in for their universities.