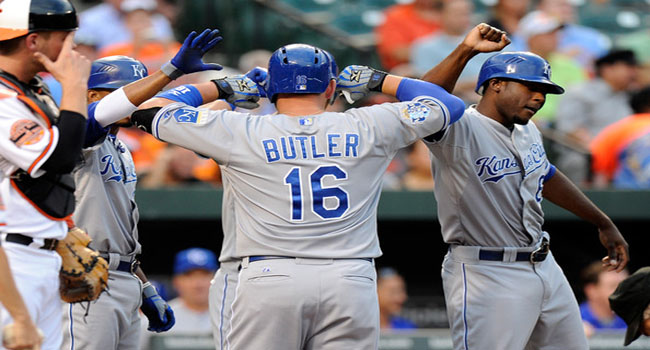 Sports brings out the best in people and while it can often bring out the worst too, it’s moments like Wednesday evening in Kansas City that make sports great. After 29 years the Kansas City Royals are returning to the World Series.

This is a team with no superstars which probably makes them even more enticing to the common fan and what I find most interesting about them is that they almost seem to be the very team they have pursued in the American League Central.

What I mean is that eight years ago, the Detroit Tigers stumbled into the playoffs for the first time since 1987. They had the division wrapped up until these Royals came to Detroit and swept them forcing Detroit into the wild-card spot. While the Tigers had more “stars” then these current Royals do, the feeling around the Motor City in 2006 was total pandemonium.

The same craziness was on display in Kansas City Wednesday night as the Royals swept the Baltimore Orioles in four games. The Royals, who lost the division to Detroit by just one game, have now won eight straight playoff games. A dramatic, extra-inning win over Oakland in the play-in game, followed by a three-game sweep of the best team in the American League in the Angels.

While those 2006 Tigers didn’t sweep their first two opponents, they did defeat the New York Yankees three games to one and then beat the Oakland A’s four games to win the AL Pennant. Despite the two losses, the momentum never the left the Tigers much in the same way it hasn’t left the Royals.

Both organizations were very competitive throughout the 1980’s. The Tigers won the 1984 World Series while Kansas City won the ’85 Fall Classic over favored St. Louis. The Royals had actually advanced to the World Series in 1980 before losing to the Philadelphia Phillies. Ironically in ’84, the Tigers defeated the Royals to advance to the World Series.

The Tigers would also win the American League East in 1987 but lost to the Minnesota Twins in the ALCS. While the Royals playoff run ended in 1985 with the title. They did have great success in the 1970’s with division titles in ’76, ’77 and ’78. All three of those years the Royals lost the ALCS to the Yankees.

With both the Tigers and Royals having good success from the 1970’s through the ’80’s, the decade plus that followed was anything but successful. The Royals struggled to stay below 90 losses at times while the Tigers would actually reach total futility in losing more games than any American League team in history in 2003.

Today these two teams may in fact be two ships passing in the night. The Tigers are likely to lose Cy Young winning pitcher Max Scherer as well as Victor Martinez in free agency. Miguel Caberera looked mortal in 2014 as he dealt with injuries and while some of the youth was good, the Tigers overall took a step back.

The Royals may be peaking at the right time with a great blend of seasoned veterans and young players who are a great fit together. Kansas City also has tremendous bullpen strength which is a great foundation for the future. Look no further than the Yankees during late 1990’s and 2000’s.

For all I know, the Royals will do just as the 2006 Tigers did in the World Series which was completely tank but this team just seems different. Win or lose, I think we are starting to see the changing of the guard in the American League Central.