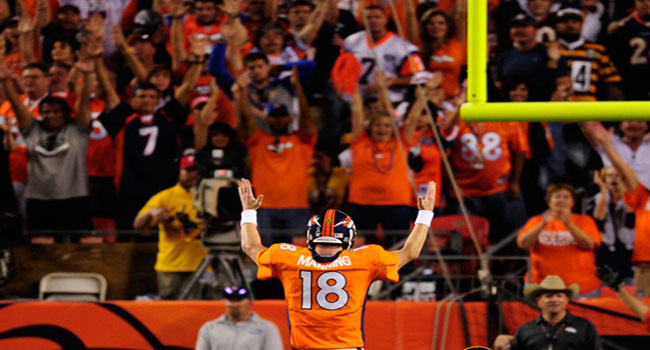 Thursday night offers us just two games on the gridiron with one being in the college game while the other is serious AFC West showdown between the Broncos and Chargers.

San Diego (O/U 51) at Denver (-7.5) – It’s hard to say that the San Diego Chargers were looking ahead to this game when they lost to the Chiefs at home on a field goal. Kansas City is a division rival and arguably was just as important as the game tomorrow night in Denver. Still, the Chargers dropped a game they probably shouldn’t have and now find themselves needing a win in Denver a little more than they did a week ago.

In the Rocky Mountain State, all eyes have been on Peyton Manning who broke Brett Favre’s record for passing touchdowns in a career. As good as Manning has been in recent weeks, the Broncos’ defense has been pretty darn good as well. They limited the San Francisco 49ers and QB Colin Kaepernick to just 17 points which is pretty impressive.

Since November of 2011, the Broncos have beaten San Diego five of the last six times they’ve met including last season in the playoffs. The Bolts always seem to play the Broncos tough home or away so I expect that trend to continue. Denver will look to make life miserable for Philip Rivers while the Chargers will need to limit the big plays from Manning and company as well.

The Pick: I think we are in for a good game tomorrow night and although I like Denver to win, take the Chargers getting the 7.5 and I like the UNDER too.

Arkansas State (-3.5) at Louisiana-Lafayette (O/U 58) – This is a very interesting match-up that could go a long way towards deciding the Sun Belt Conference champion. Right now, the Red Wolves are 4-2 overall and 2-0 in conference play.

Trailing both of them in the standings however is South Alabama who stands at 3-1. They have to travel to Arkansas State and Louisiana-Lafayette in back-to-back weeks starting November first.

What this all means is that the Sun Belt should start shaking itself out in the next couple of week.

Lafayette is one of the rare hidden gems in college football tailgating and the home-field provides quite a spark for the Cajuns. In their last four games against each other, they’ve split the series 2-2 with each posting a win at the other’s field.

Trends: The total has gone UNDER in four of Arkansas State’s last six games at ULL… The Red Wolves are 1-5 against the spread in their last six games against the Rajun Cajuns… Louisiana-Lafayette is 7-1 straight up in their last eight games when playing ASU at home… The total has gone UNDER in six of Arkansas State’s last seven games.

The Pick: Almost everything favors the Red Wolves tomorrow night and I’m not going to pass on that. Take them to cover and take the UNDER.