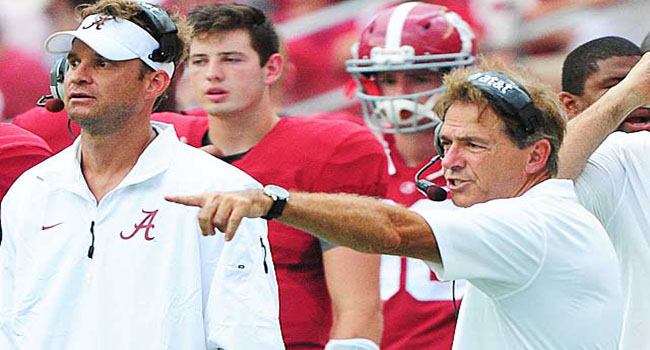 Alabama (-17.5) at Tennessee (O/U 46.5) – It’s pretty much a shame that the focus of tomorrow’s game is less about the players and more about Lane Kiffin’s return to Knoxville. Kiffin is now the offensive coordinator at Alabama and was the coach at Tennessee for just one year 2009. His tenure was marked by stupid comments and a quick split out of town for USC.

The Vols have improved under Butch Jones but this program is still a few years away from truly competing at a high level. I expect the team to have its’ moments tomorrow but these guys are significantly over-matched by an Alabama team fresh off a 59-0 destruction of Texas A&M.

The Pick: Take the Tide to cover and the OVER.

Michigan (+17.5) at Michigan State (O/U 49.5) – The Backyard Brawl in recent years has been more like the “Spartan Beat Down” as Michigan State has dominated the series winning five of the last six. Brady Hoke is no longer on the hot seat in Ann Arbor, he’s a dead man walking and sure to be replaced this winter.

Things couldn’t be better in East Lansing where Mark Dantonio has built the Spartans into a national powerhouse behind toughness, discipline and difference-making players. Last year, the Spartans sacked Devin Gardner eight times in pounding the Wolverines 29-6.

The only way Michigan keeps this close is with their defense which has been pretty decent but I don’t think they are good enough to completely stop the Spartans which they would need to do to win.

Trends: Michigan is 8-16-1 against the spread in their last 25 games on the road… The total has gone OVER is eight of MSU’s last nine games… The Wolverines are 1-6 straight up in their last seven road games… The Spartans have won five straight since losing to Oregon.

The Pick: This one is over early. Take Sparty to cover and take the OVER.

Ole Miss (-4) at LSU (O/U 44.5) – LSU is 35-2 at home since 2009 and despite this being one of Les Miles’ weaker teams, this can’t be overlooked. At stake for the Rebels is obviously their unbeaten season. The thought of both Ole Miss and Mississippi State (who already beat the Tigers in Baton Rouge) being unbeaten when they play their season finales against each other is enough to boil over the Magnolia State.

The problem that LSU is facing is that the Ole Miss defense is darn good and the Tigers’ offense is struggling to find a QB and consistency. In order for LSU to pull off the upset, the Tigers’ defense will need a colossal effort to limit Bo Wallace and the Rebels’ offense.

Trends: Ole Miss is 1-5 straight up in its’ last six games when playing LSU in Death Valley… The Tigers are 0-5 against the spread in their last five games at home against the Rebels… The total has gone OVER in four of Ole Miss’ last five games when playing the Tigers… The total has gone UNDER in four of LSU’s last six games at home.

The Pick: Every time I count out Les Miles, he burns me. Take the Tigers at home and getting the points and take the UNDER as well.

Other Games of Note: