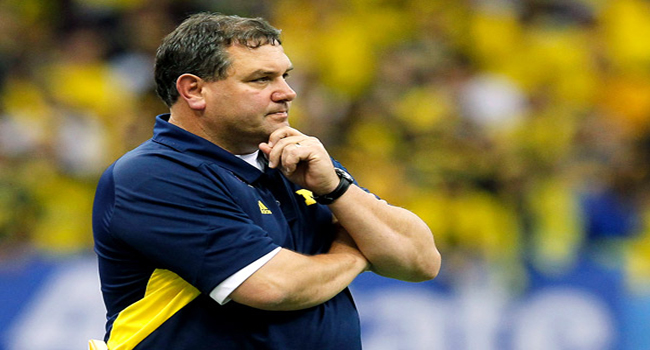 It’s pretty common knowledge that Michigan’s Brady Hoke is no longer on the ‘hot seat.’ It’s not that Hoke isn’t in serious trouble it’s that there is no seat under him to even be hot anymore. The latest nail in his maize ‘n blue coffin wasn’t even so much that blowout loss to Michigan State. It was his team’s behavior before the game and his reaction afterwords.

After taking the field in the annual ‘Backyard Brawl,” the Wolverines apparently drove a spike into the center of the Spartan at mid-field. Now before “Sparty” fan gets all high and mighty let’s not forget that it wasn’t too long ago that the Spartans stuck their flag in the center of Notre Dame Stadium following an upset of the Irish. Be that as it may, the actions by the Wolverines were tasteless and reeked of a team desperate for anything.

If you talk to Michigan alumni, they’ll tell you that’s the type of stuff that lesser programs used to do. Teams that needed to make their mark or gain attention through any means necessary. This was certainly not something Michigan did or would ever do but there it was and what made matters worse were Hoke’s comments afterwards.

The soon-to-be-fired Hoke claimed to know little if anything about what his team had done. Let’s consider just how dumb and how bad this looks on its’ own merits but then consider how badly it looks just weeks after Hoke claimed he didn’t realize his quarterback was nearly out cold.

Remember the Wolverines’ loss to Minnesota when Hoke started Shane Morris at quarterback? Morris was decked late in the game and while he tried to motion to the sidelines that he was ‘OK,’ he clearly was not as he stumbled and needed help getting to the sideline. Morris was later declared to have suffered a concussion and for Hoke and Athletic Director Dave Brandon it was a week of public discourse not seen in Ann Arbor perhaps in forever.

Brandon isn’t exactly off the hook either as he faces a huge push from the student body as well as the alumni to resign. My guess is that he will unload Hoke before anyone can unload him in a desperate chance to save his own job. Either way, but Hoke has demonstrated he really doesn’t have his fingers on the pulse of this team and that’s not good for anyone wearing the maize ‘n blue.

Race to the Final Four

With Ole Miss’ loss in Baton Rouge, the college football playoff picture got a little more clear. Or did it? Auburn won at home but struggled with a very average South Carolina team. Mississippi State struggled at Kentucky while teams like Michigan State and Kansas State posted solid wins.

There is any number of one-loss teams right now waiting to pounce if one of the remaining unbeatens goes down. Two interesting two-loss teams to keep an eye on though as West Virginia and LSU. If things get really crazy, don’t count either of these teams out if they run the table because of the teams they will have beaten.

One other team to pay attention to is Nebraska. After hosting Purdue this week, they play at Wisconsin, host Minnesota and finish at Iowa. If the Cornhuskers run the table and presumably play a one-loss Michigan State or Ohio State in the Big Ten Title Game and they win, that becomes a one-loss team that cannot be ignored by the selection committee.