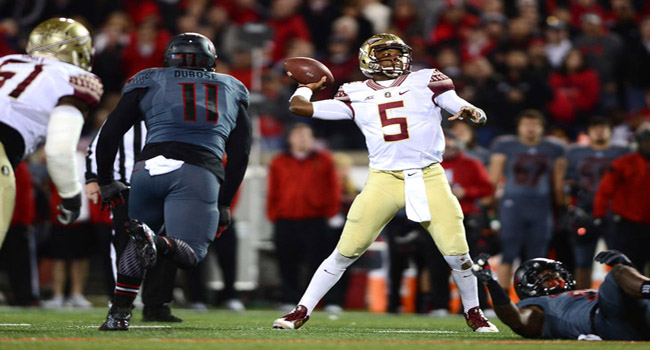 During the 2013 season, the Florida State Seminoles faced very few moments of urgency. They trailed in the first half at Boston College before storming back to win and then in the national championship game they trailed Auburn by 11 points at the break. We know how that ended…

The 2014 season has seen the Seminoles in far different scenarios. Already through eight games Florida State has trailed in half of them. Last night was no exception as the ‘Noles came back from 21-0 down in the first half to defeat Louisville 42-31. This game was seen as the Seminoles’ last serious hurdle in terms of remaining unbeaten.

FSU will host Virginia next Saturday then play their final road game of the season at Miami. Home games against Boston College and Florida round out the season. Certainly anything can happen especially with those two rivalry games but the Seminoles will be favored heavily in all of their final four games.

Great teams always find ways to win and so far in 2014 this is exactly what FSU has done. Despite all of the controversy surrounding Jameis Winston for one thing after another and then the more recent allegations against running back Karlos Williams, the Seminoles have persevered. That doesn’t mean some luck hasn’t come their way either.

Most notably was the pass interference call against Notre Dame. While I believe it was the right call, it was still a stroke of luck that it was even called in the first place. There was also the Clemson game in which Winston sat out for his stupid decision to yell obscenities in the FSU Student Union. In that game, the Tigers missed field goals which would have won them the game rather than forcing them to overtime where the Seminoles prevailed.

Last night was no different as the bounces once again went the way of Florida State. Winston threw three interceptions but on one of those he forced the interceptor to fumble the ball back to FSU. Then there was the mishandled snap near the goal line where the ball seemed to roll free for an eternity before FSU tight end ick O’Leary fell on it for a touchdown.

How long can the Seminoles keep living dangerously? My guess is that they’ll survive the final four games but the real test will be when they enter the four-team playoff where they will likely face an SEC team. There’s no question Florida State can win the national title again but the doubts are much greater than they were last year at this time. Will luck and all the bounces continue to go their way? Only time will tell at this point.

Gurley Will Return But I Have Issues With the NCAA

The fact that I have issues with the NCAA is not shocking.They are easily one of the most incompetent and over-judicious bodies I’ve ever seen. Georgia’s Todd Gurley can attest to this. I do not excuse Gurley one bit for signing collectibles and then taking money for his signature because he knew it was wrong and did it anyway. The problem I have is how easily the NCAA has just cast aside Florida State’s Jameis Winston.

The FSU signal caller has far more of his stuff than does Gurley on the website where their wares are hocked. Yet amazingly, the NCAA seems to be uninterested in this fact and takes Winston’s word that he didn’t accept money.

So let’s see; Gurley signed far less stuff and was paid. Winston has been in trouble since he set foot on the Florida State campus yet no one believes he accepted money. Actually, no one can prove he accepted money. I mean, I’m sure the Beats headphones Winston wears all over the place were purchased with money he found lying on the street right?