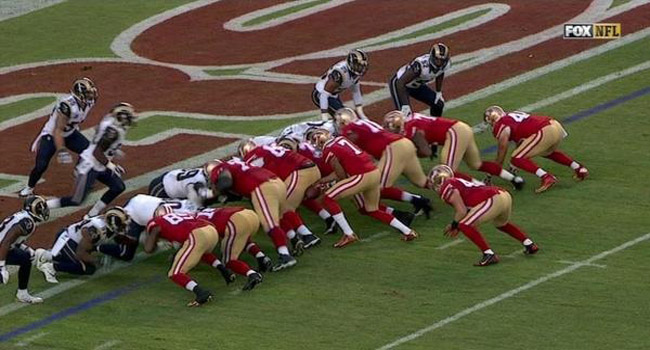 What we know about the National Football League is that this isn’t the same NFL many of us remember from 10 to 20 to 30 years ago. Teams can go from looking like the greatest teams in the history of the league one week to the worst team ever allowed on a football field.

While there are certainly teams trending upwards right now, there are also teams heading in the wrong direction. Here’s a look at a few of those teams.

San Francisco (4-4) – The 49ers hit rock bottom this past Sunday with yet another home loss this time to St. Louis. It wasn’t even that they lost but moreso in how they lost. With essentially three shots to beat the Rams from the goal line, San Francisco failed to give the ball to their workhorse Frank Gore even once.

Eventually, Colin Kaepernick mishandled a snap and James Laurinaitis came up with the ball to preserve the Rams’ 13-10 victory. 49ers’ legend Jerry Rice said this week that thinks “Jim Harbaugh will not be coaching this team next year.” Rice is not alone in his thinking. It’s no secret that Harbaugh and the general manager don’t exactly get along.

It doesn’t help calm things down either with Harbaugh’s alma mater Michigan potentially looking to hire him as their next head coach. The team expects to get pass rusher Aldon Smith back from suspension as early as next week and he will help but he won’t do much for an offense that is suddenly struggling to find its’ way.

San Diego (5-4) – Remember about a month ago when the San Diego Chargers had already racked up a win over defending Super Bowl Champion Seattle? There was much talk that the Chargers were prepared to take on the Denver Broncos for AFC West supremacy. There was also a great deal of discussion about the potential MVP-candidacy of quarterback Philip Rivers.

Things change quickly in life and the NFL is no different. The ‘Bolts have suffered three straight defeats and their most recent one has the potential to bury them for the remainder of the season. After divisional losses to Denver and Kansas City, the Chargers were steam-rolled by the Miami Dolphins 37-0. So bad was it, that Rivers was actually pulled from the game in the second half.

With so many teams above .500 in the AFC, the Chargers cannot afford to fall back any further.

Dallas (6-3) – The Cowboys opened the season with a frustrating home loss to San Francisco. They then reeled off six straight wins behind a powerful offensive line and the running of DeMarco Murray. Signaling just how important he is to the Cowboys, Tony Romo went down against the Washington Redskins with a back injury.

Although he returned to the game, he was obviously not the same QB and the Cowboys lost. This past Sunday Romo was forced to sit because of the injury and in his place was Brandon Weeden who struggled from the start as Dallas lost to the best team in football right now the Arizona Cardinals.

Romo has flown with the team to London for their game against Jacksonville but I don’t believe he will play. With their bye week coming after this game, Jerry Jones knows Romo’s health is of paramount concern. Should Romo continue to struggle with his health then I see the Cowboys continuing their slide.