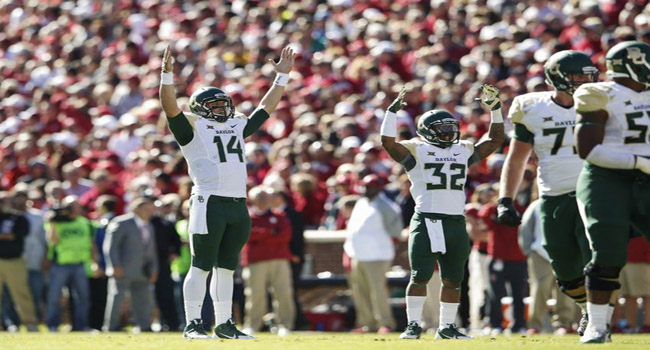 Just when you thought things couldn’t get any more strange in the the world of college football, the second Saturday of November came along. Here’s a look at the craziness.

The Oklahoma Sooners still held out hope for a Big 12 title heading into their home game against 12th-ranked Baylor. Things were certainly looking good as the Sooners led 14-3 at the end of the first quarter. Ahem, that 14 points is all that OU would score. Their defense on the other hand gave up 45 unanswered points in the Bears’ 48-14 thrashing of Oklahoma in Norman.

Minnesota and Wisconsin will play at the end of the season in Madison for the Paul Bunyan ax. Both remained on a crash course for the Big Ten West title with wins Saturday. The Gophers blew out Iowa 51-14 while Wisconsin went to West Lafayette and beat the Boilers 34-16. Both teams must face Nebraska before then and the Gophers still have the Ohio State Buckeyes as well so there is still much to be determined.

In Death Valley where LSU Had Coach Les Miles has lost just three times in 50 night games there, the Alabama Crimson Tide defeated the Tigers in overtime 20-13. Bama kicked a field goal to tie in the final seconds then scored immediately in OT. The defense took over from there forcing four-straight incompletions to earn the win.

With the Tide’s win, there are four other games from yesterday that will impact their standing heading into Tuesday’s “Big Reveal.”

A lot of people were trying to make an argument for Notre Dame should the Irish finish with just the one, close loss to Florida State. That argument is no longer valid after the Irish were left for dead in the desert by Arizona State. QB Everett Golson threw for over 400 yards but turned the ball over five times in the 55-31 loss. With this development, the Irish are on the outside looking in while ASU will have built up its’ standing with just one loss.

Another one-loss team hoping to survive the regular season was Auburn. No one however, could have seen their 41-38 loss to Texas A&M coming. The Aggies just weeks ago were beaten by Alabama 59-0 but behind new QB Kyle Allen they held off a late charge by the Tigers. Auburn will now have to be the litmus test as to whether a two-loss SEC team can make it. They still have to survive road trips to Georgia and Alabama though.

In an elimination game, the Ohio State Buckeyes went into East Lansing and dropped 49 points on the Spartans in a 49-37 win that gives Ohio State control of the Big Ten East Division. The loss for the Spartans means a chance at the college football playoff is now gone. For the Buckeyes, it means they stay alive. Their one loss was to Virginia Tech and is probably the worst loss of any of the one-loss teams so there is no guarantee OSU gets in but at least they are in position.

The other elimination game was in the Big 12 where TCU knocked off fellow one-loss tea Kansas State 41-20. The Horned Frogs have road trips to Kansas and Texas before finishing the season at home against Iowa State. On paper, it would appear TCU is a shoo-in to finish with just the one loss to Baylor. The really intriguing part here is if both finish with one loss.

Baylor finishes with Oklahoma State, Texas Tech and Kansas State all at home. The nod would have to be given to the Bears should they also finish with just one loss

My top Four for right now would be Mississippi State, Florida State, Oregon and Alabama.