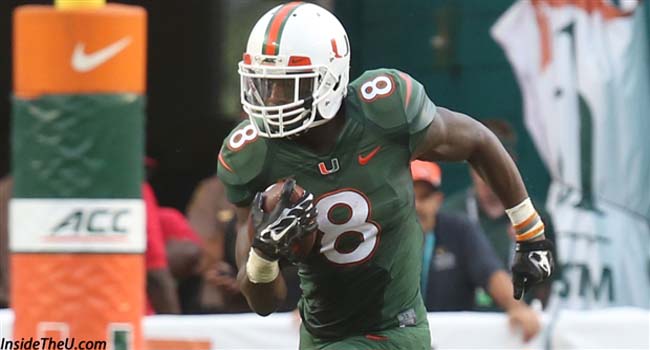 Florida State (-3) at Miami (O/U 61.5) –  For the first time in a long time Miami enters the Florida State game with a legitimate chance to knock off the Seminoles. They’ve won four of five and they are powered by their fantastic running back Duke Johnson. That said, they’ll need more than just him to pull off the upset.

With Jameis Winston’s Title IX hearing pushed back to the first week of December I think you’ll see him play a little better. His off-field problems won’t be front and center in his mind. The defense will focus on Johnson and will force the Canes’ passing game to beat them.

Trends: FSU is 2-8 against the spread in their last 10 games… The total has gone UNDER in nine of Miami’s last 13 games against the Seminoles… Florida State is 4-1 straight up in their last five games when playing Miami on the road… The Hurricanes are 2-4 ATS in their last six game at home against FSU.

The Pick: The Seminoles just keep finding ways to win and I think it continues in a fairly tight game. Take them to cover and take the UNDER.

Mississippi State (+8) at Alabama (O/U 52) – A top-ranked team has been this much of an underdog since the 2013 BCS Title game when Bama was favored over #1 Notre Dame by ten.

A lot of people look at this current Alabama team as being a bit flawed. They’ve got a few injuries and the offense other than Amari Cooper isn’t all that exciting but then you look at the numbers. The defense is giving up more than 150 yards less than the Bulldogs’ defense does.

Offensively the Tide are out-passing Dak Prescott and the Bulldogs but trail them in running the football. Normally I’d say this should be a close game but I just don’t feel that way here. Bama plays in these games all the time while Mississippi State is facing its’ most important game in their history.

The Pick: I have a feeling Nick Saban and the Crimson Tide will roll. Take them to cover and take the UNDER as well.

Arizona State (-9) at Oregon State (61.5) – The Sun Devils’ win over Notre Dame has catapulted them into college playoff discussion and rightfully so. Now they must go to a place where they haven’t won since 2005 if they wish to keep that talk going.

The Beavers have lost four straight games and three of those were at home. Senior Quarterback Sean Mannion entered this season as a top NFL prospect but he’s been hampered by an poor offensive line that has seen him get sacked 28 times.

In most years I’d worry about ASU going to Corvallis especially after such a big win but I’m not so sure this time around.

The Pick: The Beavers still need a win to become bowl eligible and still face Oregon as well. I don’t think it matters as I like the Sun Devils to cover and I like the OVER.

TCU (-28.5) at Kansas – Any time a spread goes over four touchdowns I run and hide. Take the Jayhawks.

Ohio State (-14) at Minnesota – The Buckeyes are coming of an emotional win in East Lansing and now have to deal with a very good Gophers’ team. I sense a letdown. Take Minnesota.