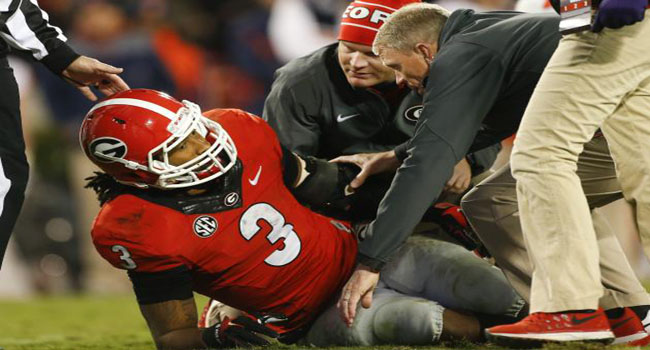 It was huge win for Georgia. They defeated Auburn 34-7 after spotting the Tigers a 7-0 lead but a cloud hung over Sanford Stadium Saturday evening as news spread that Bulldogs’ Running Back Todd Gurley had a very serious injury. It was confirmed yesterday that Gurley will miss the remainder of the season with an ACL tear. This was Gurley’s first game back since admitting he took money for signing autographs and this wasn’t how his Bulldogs’ career was supposed to end.

Gurley will still get drafted but this has to hurt his stock. It’s another tough blow for kid who admitted his mistake, served his punishment and returned only for this to happen.

Ironically, it was a Todd Gurley-less Georgia team that seemed to have saved Will Muschamp’s job at Florida. The win was sorely needed by both school and coach but now none of that matters as the university announced yesterday that Muschamp would not return.

It seems likely that the Gators will reach a bowl. At 5-5, Florida will play host to Eastern Kentucky which should provide them their sixth win and common sense would have to tell us that they’ll fall to rival Florida State in the finale. It’s doubtful he would coach in a bowl game if the Gators even accept a bid.

As has been the problem all season, what big name is out there for the Gators to go get? I would have to think Dan Mullen will get a call and heck, maybe even Urban Meyer (kidding)? I think Muschamp put forth great effort but between injuries and just flat-out poor play, his fate was sealed.

It came as no surprise to me that Alabama beat Mississippi State Saturday. Bama has played in games of this magnitude for years and the fact they were at home was just icing on the cake. The Crimson Tide defense sacked Bulldogs’ QB Dak Prescott just once but they harassed him all day forcing him into one poor throw or decision after another.

I don’t feel like this is a typical Nick Saban team but they still find ways to win and it all starts with Saban. With a cupcake in Western Carolina coming in next week and a reeling Auburn the following one, I see no reason why the Tide won’t be in the four-team playoff.

Where we stand now in the race for the playoff

As usual, we are left with more questions than answers as we await the college football playoff committee’s rankings on Tuesday night. The first question will focus on Mississippi State. With a five-point loss in Tuscaloosa, is that enough to keep them in the top four? I believe it is.

The second question is whether the committee will punish TCU for barely beating a Kansas team that Baylor destroyed. The Bears beat the Jayhawks 60-14 while the Horned Frogs escaped 34-30. The debate between both Big 12 teams has been strong but perhaps even in victory it is no longer up for discussion. The committee rewarded TCU ahead of Baylor (even though the Bears beat the Frogs) because of their more impressive schedule.

I think, based upon TCU’s close call and Arizona State’s blunder at Oregon State, Baylor will move up to #5 and wait for someone to fall above them. Therefore I believe the committee will come out with the following top-four;

With the committee elevating an Alabama team to number one even though they weren’t in the top four will create the talking points this week. Let’s face it; talking points are what this whole thing is about anyway right?