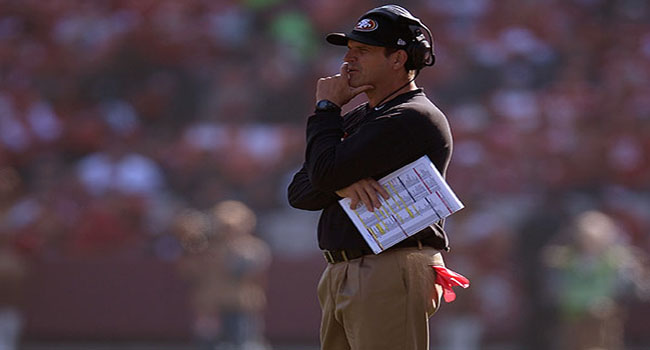 Well, there it is. The University of Michigan is doing their absolute best to bring home Jim Harbaugh. By now you probably already know what the contract offer looks like, six years and $48 million, but there’s a lot more to this story now than just the money.

Here’s a look at the ramifications of just the offer being thrown out there.

For Harbaugh – This offer immediately makes NFL teams prizing his services take notice. At eight million per year, it’s not out of the range for an NFL team to pay, but it does make it a little harder.

It’s believed that Oakland Raiders’ Owner Mark Davis will pay this much and more in an effort to get Harbaugh to come across the bay. There’s even a report Davis was willing to pay Jon Gruden as much as $16 million so eight is a drop in the bucket.

Harbaugh is clearly in the cat-bird seat while this unfolds. His team is out of the playoffs so his focus can pretty much be wherever he wants it to be. I expect the New York Jets and Miami Dolphins to be in play for him.

Don’t forget that Dolphins’ owner Stephen Ross is a Michigan Alum with an endless bank account.

For Michigan – The school has obviously made it known they are no longer willing to be the punching bag for Michigan State and Ohio State and anyone else beating the Wolverines these days. This kind of money says only one thing; “We want success now.”

The problem is dealing with the letdown of a potential Harbaugh pass. The only way that pain is tempered is if Michigan goes and gets a current head coach of a program that no one sees coming. A guy like Gary Patterson or Mark Helfrich or Kevin Sumlin.

Regardless of who it is, anyone not named “Jim Harbaugh” will be a letdown to the vast majority of the fan base.

For Other College Coaches – If you heard a loud ring coming from Tuscaloosa, Alabama last night that wasn’t just yours ears. That was Nick Saban’s agent calling Alabama to demand a raise.

There’s no way that Saban is going to be paid less than a guy who has won very little at the collegiate level and especially way less than he has. This effect will be a trickle-down one too. Guys like Jimbo Fisher, Urban Meyer and Mark Dantonio will also be looking for raises.

Even if Harbaugh goes in another direction and leaves Michigan hanging, those numbers aren’t going to go away. There isn’t a college coach in America who hasn’t had his eyes pop out from that offer.

For the 49ers – If I’m owner Jed York and I see how in demand my coach is and he has one year left on his deal, I’m increasing the price for his services. Common thought was that it might take a couple of third-round picks to get him out of his final year.

Now? I’m asking at least a first-round pick and then the negotiations can begin from there. York can’t let him go for nothing.

My Prediction: I honestly believe Michigan means a lot to Harbaugh but he’s not coming back. He’s spent nearly all of his coaching career on the West Coast and appears to be very vested in his family and their wishes.

This doesn’t mean he won’t listen to the Jets or Dolphins but right now I think Harbaugh either stays in San Francisco or goes across the bay. The lure of the Super Bowl title is too much for him to ignore.