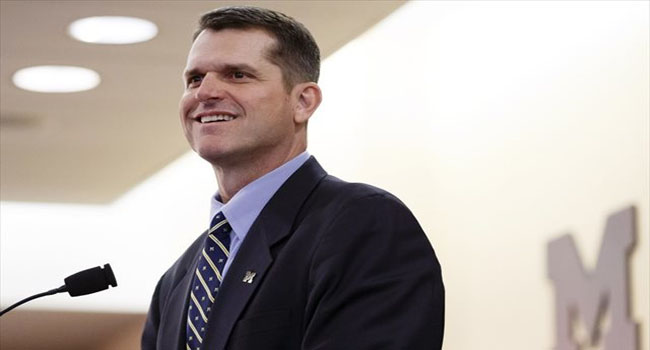 University of Michigan Interim Athletic Director Jim Hackett made it very clear in the days following the firing of Brady Hoke; having a “Michigan man” was no longer a top priority.

There was always an exception to that rule and his name was Jim Harbaugh. Yesterday, Harbaugh became the 20th head football coach of the Wolverines. There is no one more “Michigan man” than Harbaugh who started at quarterback from 1984-1986 for the Bo Schembechler -led teams who were so successful.

I must admit I’m surprised Harbaugh spurned the National Football League and especially for less money than what he could have gotten from just about any of those teams. I think that two things played a major factor in his decision however.

Number one is that of the available NFL jobs, none had a quarterback that Harbaugh really wanted to work with and that’s vitally important for the old QB because as we know he can flat-out coach quarterbacks (see Andrew Luck). The Raiders and Jets both have young signal-callers but neither was enticing enough for Harbaugh.

The argument could be made that both Atlanta and Chicago have good, veteran quarterbacks in Matt Ryan and Jay Cutler but each have their issues.

The second reason Harbaugh chose to leave the NFL is because I really feel he was tired of seeing what was happening to his alma mater an the call to come home and fix it was too great.

Michigan fans will once again pack the seats at Michigan Stadium to see the prodigal son return and he will make the program prominent once again but I caution them this; the desire to win a Super Bowl never leaves you as a player or coach if you’ve had a taste of it and Harbaugh has. I believe his stint in Ann Arbor will be five years or less because that desire will be too strong to avoid.

-What on Earth has happened to Bob Stoops and Oklahoma? They were a preseason top five team who ended up finishing with five losses following a humiliating 40-6 loss to Clemson in the Russell Athletic Bowl. That score wasn’t indicative of how poorly Oklahoma played either. It was 40-0 after three quarters and Clemson pretty much emptied the bench in the final stanza. I have a feeling Stoops falls into that category of having been in the same place too long.

-I could be way off base here, but I think the Pac-12’s success in these early bowl games is a sign that Florida State better strap it up tomorrow when they face Oregon in the Rose Bowl. After Stanford’s 45-21 drubbing of Maryland last night in the Foster Farms Bowl, the Pac-12 moved to 4-0 in bowl season making them the only unbeaten conference remaining. Let’s face it – the level of competition between the ACC and Pac-12 wasn’t really a discussion topic anyway was it?

-As if I needed any more proof for my personal war against instant replay reviews in football I give you the LSU-Notre Dame game. Mad Hatter Les Miles went for a fake field goal and replays clearly showed the ball breaking the plane of the goal line but officials concluded it was disputable because of where the knee was. Here’s the thing, if the knee was down the play is over based on where the ball is when the knee touches right? The ball was over the goal line. If you can’t get replay right that you shouldn’t use it.

-Have a great New Year’s Eve and be safe people.