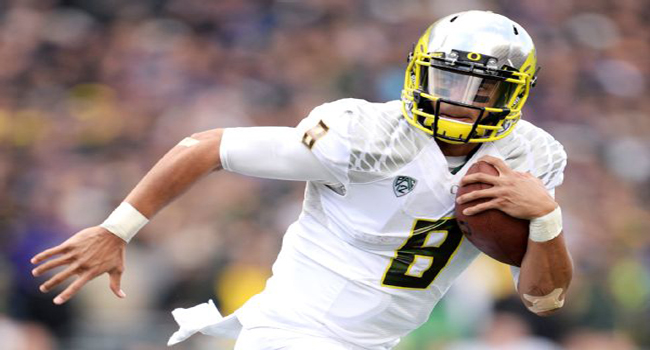 You’ve probably heard this little trivia tidbit by now but in case you haven’t here it is… Following the first-ever NCAA Basketball Tournament in 1939, the two teams that met for the title were Oregon and Ohio State. The Ducks would claim their one and only national championship in men’s basketball.

Now, these same two universities meet in the first-ever college football playoff title game and again, the Ducks enter having won zero national championships in football. Both teams enter at 13-1 and both won their respective conference titles.

Each school offers intriguing storylines as the game kicks off tonight. Who do I like and why? Read on.

Why Ohio State Wins: As good as Oregon Head Coach Mark Helfrich has been, Urban Meyer is a master game-planner who rarely is out-prepared by his opponent. Meyer’s experience heading into this game is significant as well and should be an advantage to the Buckeyes.

The defensive line for OSU has been dominant all season and eventually overwhelmed the Alabama offensive line. The Oregon offensive line is very good and is more aggressive than they are given credit for so this should be an excellent match-up.

I think the Buckeyes defensively have recognized the fact they will give up yards to Oregon but can they limit the Ducks in the red zone where Oregon has had some struggles? I think the Buckeyes can also bank on the fact that they aren’t going to turn the ball over as many times as Florida State did and that’s important for their confidence.

Why Oregon Wins: There is going to be no secret as to what the Ducks are going to do. They will go at a high rate of speed and they will not relent. If they can find some success early running the football against a good OSU defense then that will make Marcus Mariota all the more dangerous.

The loss of wide receiver Darren Carrington due to suspension is going to hurt a lot but if the Ducks can find someone to step up that isn’t necessarily expected to then the Ducks will be fine. That’s a tall order however and I’m worried about this situation which is why I think they look to the ground game even more often.

Defensively, the Ducks must stop the run and force the game into the hands of Cardale Jones. Alabama was unable to do that and what was even worse is that the Tide weren’t able to contain Jones when he ran either. If Oregon can force Jones into some early mistakes and force him to play from behind then things can swing in their favor dramatically.

The Pick: I was liking the Buckeyes all week but now I like them even more with Carrington out for Oregon. Don’t be surprised to see a defensive game for most of the first half before the offenses settle in but either way I love Ohio State and the UNDER.