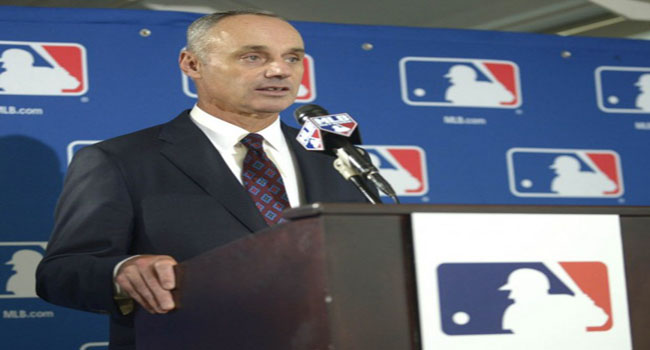 Commissioners of professional sports in America do not have easy jobs. While being the leader of the National Football League would mean more to me than being President of the United States, I realize it can be a daunting and thankless job.

I believe that the best way for any new commissioner to come into his or her new assignment is to do so quietly and without much fanfare.

While National Basketball Association Commissioner Adam Silver certainly could have never expected he’d be facing the crisis he did with LA Clippers’ former owner Donald Sterling, he did so with grace and suitable forcefulness.

New Major League Baseball Commissioner Rob Manfred has decided that coming into his new post quietly was apparently not an option.

In a recent interview, Manfred expressed his willingness to ban the practice of defensive over-shifting. This is what is done to combat heavy pull-hitters in the game. My initial was one of curiosity but the more I thought about it the more I couldn’t help but wonder “what in the wide world of sports would motivate this move?”

Well, let’s look to the current sport in the country that holds the title of “America’s Pastime” and that would be the National Football League. If you didn’t think Commissioner Roger Goodell was all about money then you must have missed former Commissioner Paul Tagliabue’s comments. But that isn’t what I’m getting at.

Goodell’s affect on the NFL has been one of increasing revenue and for him, that’s meant increasing offensive output. More scoring appeals to average fans and it appeals even more to those millions who participate in fantasy football.

Now go back to Manfred’s proposal to eliminate the shift in professional baseball. If he gets his wish and players are forced to cover “zones” on the diamond, that means pull hitters will gain a decided advantage in hitting. More hitting means more offense which in turn means more runs. And who doesn’t love more scoring right?

If you aren’t following here’s the example. Batter A is a dead-pull hitter and is right-handed. Many baseball managers will put the “shift on” sliding the third baseman to the fair/foul line… Will slide the shortstop towards the third baseman’s natural position… Will slide the second baseman to the left of second base, or more towards the shortstop’s natural spot.

The first baseman therefore is the only infielder to the right side of the diamond. The outfield will naturally shift as well meaning the left fielder goes to the line, the center fielder moves well left and the right fielder moves towards center.

Commons sense tells the manager that if Batter A is a dead-pull guy and you’ve got all of your defense over there to defend him, then he’ll have the pitcher work to get the ball hit there.

Now imagine shifts like this aren’t allowed. A dead-pull hitter now has just the third baseman, shortstop and left fielder to contend with while in a shift, he has the center fielder and the second baseman added to the equation.

Is Manfred’s suggestion the worst idea in the world? Now, it probably isn’t in the grand scheme of things but this is not the way I would imagine he wanted to put his first stamp as commissioner on the game. If Manfred can learn anything, perhaps he needs to keep an eye on those NFL offices in New York City where they can’t do anything right.

Baseball has a prime opportunity to regain some favor with basic fans but drastically altering the defense of baseball isn’t a good way to do it.