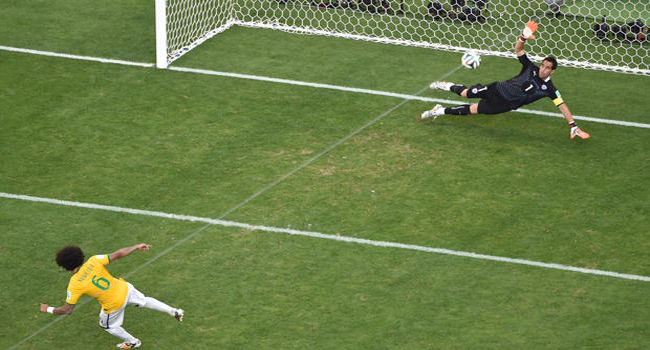 Welcome to 2035! Jump on board the time machine with me as I give you my thoughts on what sports in America will look like 20 years from now.

The biggest change overall will be the rise of soccer. If you read my column regularly then you know this just destroys me but it’s what I see happening. The world is a smaller place now because of technology and social media and the most recent World Cup proved just how crazy Americans are getting over soccer.

The vast majority of the fan base right now is kids, teens and twenty-somethings with smatterings of older adults thrown in here and there. If you advance things 20 years, that means the current fan base will be a prime mixture of fans in their 20’s, 30’s and 40’s.

Soccer has long been treated as a red-headed step-child in America but with the fear police assaulting football, I see it growing by leaps and bounds.

Speaking of football, I have a gut feeling participation nationally will continue to drop as parents keep their kids from playing for health reasons. Far be it from me to tell any parent how to rule over their child but I believe much of what has happened to “make the game safer” has largely been blown out of proportion.

I also believe that college football will actually become bigger than the National Football League. I feel this way because the NFL will continue to lose viewers. Recent polls have shown that men over 50 is the largest demographic that is no longer watching pro football.

That speaks volumes because if they stop watching then their kids will become less interested as well. The pro game in general has become a shell of its’ former self with the violence of the game all but removed and defense becoming an after-thought as everything favors offenses today.

If the NFL moves teams to Europe I also predict that will quicken the pace of its’ demise.

My crystal ball sees the National Basketball Association staying popular but it faces some challenges. First and foremost the game must have personable stars that provide the face of the league. LeBron James is clearly that face today but Michael Jordan set the bar so high I wonder if it is unreachable. I have yet to see a player with Jordan’s ability to be an assassin on the court and be friendly off it has been unmatched.

I also think the NBA will shorten its’ season. We are seeing a rise in star players spending more time on the bench for rest and for minor injuries. Fans will demand this going forward.

Major League Baseball will continue to see Latin players flood the rosters. This is not a bad thing in any way. MLB’s biggest issues will be keeping the games as short as possible as well how to deal with pitching injuries that are on the rise. Don’t be surprised if MLB contracts a few teams in an effort to keep competitive balance high.

I also see contraction in the National Hockey League where some teams just aren’t filling seats. The NHL will finally have some personalities and players that will draw fans in that haven’t normally been there in the past. The game itself is in good shape, but it will need to do more to draw in those fringe fans and I think it will once Gary Bettman is no longer the commissioner.

Al in all, sports will continue to dominate our lives but I see changes coming and for me personally I’m not real crazy about them.