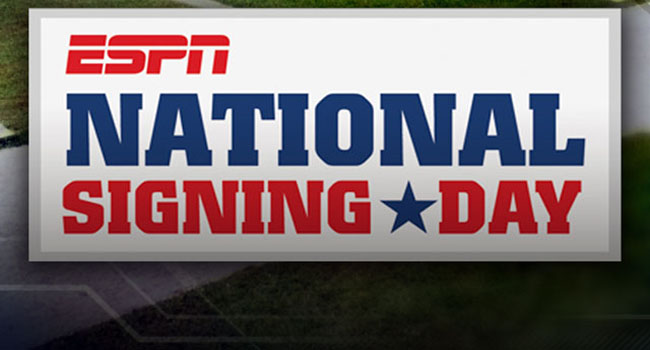 There was a time when yours truly was actually recruited to play football at the moderate D-1 level and basketball and baseball in the D-3 level. I’m not going to get into how long ago that was but lets just say the Buffalo Bills hadn’t lost a Super Bowl yet.

I tell you this because I was fortunate enough to be in the presence of some guys who were recruited by the big boys in football and it was nothing like it is today. I’m not saying that this is bad, but if you would have told me that national signing day (NSD) would become a “national holiday” I would have told you that you were nuts.

If you head over to the worldwide leader you’ll get an NSD bonanza that provides you with just about everything you need to know. You’ll get player rankings and team rankings and you’ll also get the schools that did the best job and those that did the worst.

But wait! There’s more! You can also get the best fashions of NSD! Just what every college football fan wants right?

Sorry but that’s where I have to draw the line. We are already putting enough pressure on these 17 and 18 year old kids but now we are going to critique what they are wearing when they sign on the dotted line? Let’s just end the shenanigans and call college football what it is; the National Football League Developmental League.

Making matters worse are the full-grown adults who attack these same kids on social media. “You didn’t come to my school!?!? How dare you!” What makes this scenario even worse is that the vast majority of these “fans” aren’t even graduates of the schools they love so much. I’m not suggesting you have to be an alum of a school to root for it but perhaps it  would help your case.

Ya I probably sound like ‘grumpy old man’ but I really don’t care. It’s completely out of control and it isn’t going to get any better.

The NFL’s Second Season Off to a Fast Start

The National Football League’s 2014 season is officially over but the “excitement” of the second season is already underway. If you aren’t sure what the second season is, it has nothing to do with free agency or the combine or the draft. This is now the time where players who are no longer under the constant thumb of their teams start getting arrested and/or in trouble.

The biggest name in trouble since Super Bowl XLIX ended was Hall of Famer Warren Sapp. The now ex-NFL Network analyst was arrested for soliciting two prostitutes and assault in Arizona.

Also in recent days, Indianapolis linebacker D’Qwell Jackson was cited for simple assault when he got into an alteration with a pizza delivery man. You probably already know that Cleveland’s Josh Gordon has formally been suspended for all of next season for his repeated issues with drugs and alcohol.

Perhaps least known name is the one with most surprising arrest. Green Bay defensive tackle Letroy Guion was picked up by police in Florida with over 350 grams of marijuana, a 9mm semi-automatic handgun and almost $200,000 in cash.

Behavior like this is far from rare. Arrests of NFL players almost always spike in the days and weeks following the end of the season. Perhaps Commissioner Roger Goodell could take a few minutes from all that time he gives the media to address the situation.