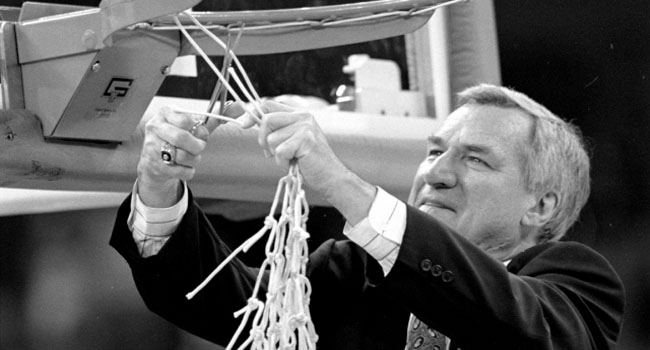 I could write much of what you’ve read already regarding Dean Smith who passed away this past weekend but I’m going to give you something else to think about. Yes, he was an amazing coach and even better person but my question is this; just how successful of a coach was Smith?

He recorded 17 Atlantic Coast Conference Regular Season Titles and 13 ACC Tournament titles. He also coached his Tar Heels to 11 Final Four appearances and two national titles. Smith also revolutionized the game with his four-corners offense which took time off the clock and ushered in the creation of the shot clock in college basketball to combat it.

Back to the question at hand though, could Smith have been better?

11 Final Fours is impressive and ties him for second all-time with Mike Krzyzewski and one behind all-time leader John Wooden but to win just two titles out of 11 leaves a little to be desired in my opinion. Consider also that his two titles needed ridiculously bone-headed plays by Chris Webber of Michigan and Fred Brown of Georgetown.

My goal here is not to kick the man when he’s just dying. What I hope is that perspective can be gained from looking at his overall record.

My feelings nor the feelings of anyone else can take away Smith’s contributions to the game. Most importantly we cannot ever forget his commitment to bringing in black players to a southern university either. All that said, I believe Smith to be worthy of his Hall of Fame status but I can’t help but wonder if he shouldn’t have achieved more in terms of titles.

If you haven’t seen the ESPN special feature on University of Michigan basketball player Austin Hatch then do yourself a favor and check it out. Take the name off of the jersey and just imagine this is a kid going to any major university in America. What he has been through is unbelievable and that’s putting it mildly. Head over to ESPN and check it out.

While my dreams of seeing Virginia and Kentucky meet in the NCAA National Title game undefeated went by the wayside, I can still hope for some epic potential match-ups can’t I? Despite a serious scare from Florida yesterday, the Wildcats moved to 23-0 on the season.

Obviously a one-loss Virginia team would still present a great title game but can you imagine if Gonzaga hooks up with the Wildcats? It would be a David and Goliath-type game despite how good the Zags have been recent years.

Wisconsin would be a very intriguing match-up simply because of the overwhelming contrast in styles and we cannot forget the possibility of yet another Kentucky versus Duke thriller.

There’s still a lot of basketball left to be played but the conference tournaments will be here before you know it so there’s still much to be decided.