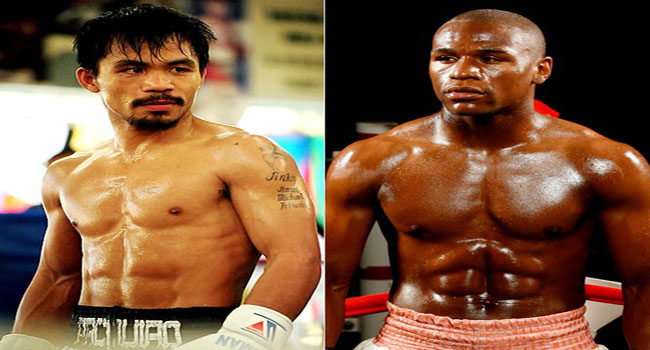 Although it’s coming about five or six years too late, the two greatest boxers of this generation are finally going to meet inside the ring rather than through social media. Floyd Mayweather, Jr. announced yesterday that he and Manny Pacquiao will meet on May 2nd.

The unbeaten Mayweather turns 38 years old this week while Pacquiao is 36. I see no reason why this won’t be a great fight but I would be remiss if I didn’t suggest it would have been even better several years ago. Sadly, the reason why this match has taken so long to happen is why boxing has suffered in the last 20 years and we have promoters to thank.

But to be fair, its’ been far more than that that’s delayed this fight. Everything from networks to types of drug-testing to who gets what split of the pot has kept this event from happening. HBO and Showtime have agreed to produce the fight together and it looks like it will cost viewers about $90 for the fight via pay-per-view.

Right now Mayweather is listed at -275 and Pacquiao is at +220 and I don’t think that will change a lot. Regardless of who the money pushes towards this will be the richest fight in the history of the sport and it’s about time.

New Major League Baseball Commissioner Rob Manfred has wasted no time in putting his stamp on the game. Already Manfred has suggested banning the defensive shift to combat pull hitters, wants to shrink the strike zone starting in 2016 and now wants to speed up the game.

As much as I’m a baseball purist, I think the new rules are needed. Batters continue to take more and more time in between pitches and while that might just be a few seconds, that adds up over the course of a game. Batters will now have to keep at least one foot in the batter’s box between pitches unless authorized but the umpire to do otherwise.

MLB’s goal is to speed up the game not so much for those at the stadium but for the television audience. Teams will be advised that there will no longer be a long delay once the networks come back from commercial. Instead, pitchers and batters will need to be ready to go when the commercial break is over.

I don’t think what Manfred and MLB are asking is impossible nor is it ridiculous. Watch film from games 40 years ago or more and you’ll see batters rarely leave the box and pitchers rarely leave the mound. Why we’ve gotten away from that I have no idea but I welcome the changes and I anticipate they’ll make the baseball viewing experience better.

Perhaps the hand of NASCAR was already played thanks to the National Football League when it came to domestic violence. With the NFL and NASCAR sharing many fans, the country’s top racing circuit followed the lead of the NFL and suspended racer Kurt Busch following a court’s ruling that Busch smashed the head of his former girlfriend into the wall of their motor home.

The ruling comes just two days before the Daytona 500 and the official start of the 2015 NASCAR season. Busch and his lawyer, Rusty Hardin who you may remember represented Roger Clemens, called the decision “disappointing” and that the “this is a travesty of justice.”

The bottom line is that NASCAR could not sit on this. It was already public and many were watching with very keen interest to see how the “good ole’ boys” would handle domestic violence. For now, they are doing things the right way.